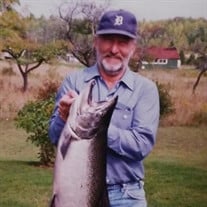 Skip grew up in Brightmore, Michigan, and then served in the United States Army in Korea. After his service, he worked at Fred’s Auto Electric in Brightmore. On January 12, 1956, he and Peggy Elsa Henry were married in Angola, Indiana, and made their home in the City of Wayne, Michigan. In 1964, Skip began working in owner relations for Ford Lincoln Mercury and retired from there 30 years later in 1994. With their children grown and some of them living in the Western Upper Peninsula, Skip and Peggy made their home in St. Ignace, to live between their children and, of course, so Skip could fish every day.

Skip was active in the Masonic Temple, Shriners, and St. Ignace Sportsman’s Club. When his children were in school, he was a 4-H leader, Boy Scout leader, and an advisor for Junior Achievement.

Skip loved fishing and all else outdoors. He enjoyed hiking, canoeing, cross country skiing, bike riding, and hunting. As a young man, he also enjoyed car racing. Indoors, he enjoyed the company of his numerous pet cats.

Skip was preceded in death by his sisters, Mary Jane Hopper and Edythe Fuller.

A private family gathering will be held to celebrate Skip’s life.

Please consider a donation in Skip’s memory to your local animal rescue organization.

Galer Dodson Funeral Home & Cremation in St. Ignace, Michigan is serving the family. Condolences may be sent to the family at www.galerfuneralhomes.com.