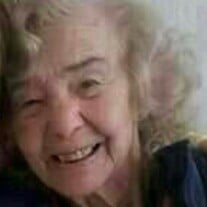 Carol Ethel (Bellanger) Boucher, 91, of Sault Ste. Marie, MI passed away Sunday October 17, 2021 at Hospice House of the EUP. She was born September 20, 1930 in Brimley, MI to Carl and Lillian (Thompson) Belanger.

Carol was born in Brimley but spent alot of her time on Sugar Island.

Visitation for Carol will be Friday October 29, 2021 from 12:00pm until the time of the funeral service at 1:00pm at the Sault Tribe Niigaanagiizhik Ceremonial Building with Father Nicholas Thompson officiating. Final resting place will be Oaklawn Chapel Gardens.