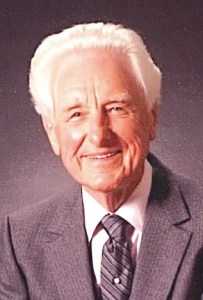 William F. Postma (and his wife, Laura) were born in the rural community of Rudyard in the Upper Peninsula of Michigan.  His parents were Jenny (Ploegstra) and William F. Postma, Sr.  His early years were spent on the farm, growing hay for tahe cows, milking, and with the help of his siblings Edna (Besteman,) Doris (Bawks,) Harvey, and Winifred (Snelgroes,) growing most of everything they needed in their large garden and orchard.  They suffered the harsh winters and short summers of Northern Michigan, part of a large community of Dutch settlers united by the Christian Reformed Church.

Bill did not stray far from Rudyard until he finished high school (a bit early, due to the war) and enlisted in the Army Air Corps in December of 1943.  His hopes to be a pilot led to training in Florida, Mississippi, Kentucky, and Texas.  But as the war wound down and the need for pilots diminished, Bill accepted an early discharge.  (As he tells the story: When Hitler heard that Bill Postma had joined the Army, he decided he’d better quit.)  He returned to Rudyard to re-connect with a long-time “friend”, Laura Van Sloten, married, and enrolled at Calvin College in Grand Rapids, Michigan under the provisions of the G.I. Bill.  He and Laura both earned teaching credentials there and then migrated to California in 1949 to teach at Bellflower Christian School.  During the summers between his Middle School classes, Bill began working for Koopman’s Furniture in Bellflower and eventually transitioned to full time at Koopman’s. Beth, Jim, Joyce, and Ruth came along, triggering a series of moves to Artesia.

In 1962, Bill left Koopman’s and with a partner, Hank Dirksen, purchased Frawley’s Furniture in Artesia to form Dirksen and Postma Furniture.  Five years later, Hank Dirksen formed Dirksen Appliances across the street and the furniture store was renamed Postma’s Furniture.

Soon Mary arrived and the store was thriving.  Bill (and eventually Laura) began to enjoy travel, ultimately crossing the world to Asia, Australia, New Zealand, Central and South America and Europe.  For several years Bill was on the Board of Directors of Schloss Mittersill, a European ministry associated with Inter-Varsity Christian Fellowship.  That commitment necessitated annual trips to the Schloss (castle) in Austria.  Each of these trips created an excuse to visit various European destinations: The Netherlands, Germany, France, Italy, Switzerland, and even Liechtenstein.  Each of the kids had at least one turn to go along to Europe which gave each of them the travel bug.

Bill and Laura and the family were always deeply involved at church, initially at First Christian Reformed Church of Artesia, then El Dorado Park Community Church, and finally Cottonwood Christian Center.  Bill typically served on the church board or council and the past few years was active in Cottonwood’s prayer ministry, which served as his church family.  Christian Education was also a high priority for Bill and Laura, so the kids attended Artesia Christian and then Valley Christian Junior High and High School.  Many of those years found Bill serving on the board or in various other roles.

Laura passed rather suddenly in 1986 and Bill began a new phase where the store was still important but his family now took precedence.  That meant special times with the grandchildren, at the toy store, restaurants, or at his home, where he indulged them as only a grandparent can.

Bill continued to operate Postma’s Furniture until he was 92 years old; a mild stroke slowed him down a bit in his 89th year but he continued with able assistance from his daughter Beth as well as a very loyal staff.  Until the last week of his life, William lived on his own, tending his extensive rose collection and regularly delivering roses to a large number of his female friends.