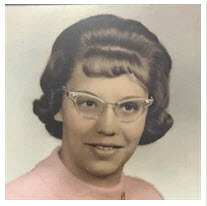 Lois grew up in Carp Lake, Michigan and graduated from Mackinac City High School with the class of 1965. After graduation she began working at Control Engineering Factory in Pellston, Michigan. She met Lester Eugene Clear Jr. and they married on March 7, 1970 in Levering, Michigan They started their family raising two boys. After several years at the engineering factory, she went to work as a housekeeper for the local cottages and then for Litzner’s Farms picking potatoes. She worked with the local cottages before she began working at Aurora Borealis Motel. She later moved to St. Ignace and continued to work at Aurora Borealis. After over 15 years of housekeeping, she retired and worked at the local ice cream shop.

Lois was preceded in death by her parents; son, Randy Clear; brothers, John and Raymond Terrian; and brother-in-law, Marty Jones.

There will be a Spaghetti Benefit Dinner in her memory on November 8th at 1:00pm at Clyde’s Place, 6337 Paradise Trail, Carp Lake, Michigan 49718.

Flowers or memorial contributions can be sent directly to her son, Christopher, at PO Box 42, Carp Lake, Michigan 49718.