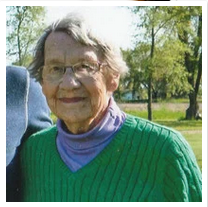 Katherine Mary Kee died peacefully surrounded by family on September 25, 2020, at Cedar Cove, in Cedarville, Michigan. She was born in Grand Rapids, Michigan on May 5, 1921 to Harold H. Isaac and Helen M. Read Isaac.

Katharine grew up in the Grand Rapids and Battle Creek area with her two brothers. She graduated from Lakeview High School in Battle Creek and then attended Western Michigan University, earning a bachelor’s degree in education. She taught school and worked for a newspaper until her marriage to an Army veteran from Ellendale, North Dakota, Clinton George Kee. After their wedding on June 7, 1947, they moved to Ellendale to start their family.

Katharine stayed at home to raise her seven children, while her husband and his brother owned and operated the Kee Brothers Ford/Massey-Ferguson dealership.

She loved flowers, camping, (camping in a tent in her 90’s), swimming, and was an avid reader. She was a member of Eastern Star. She was widowed in June of 1976 and moved permanently to Cedarville, Michigan in 1980 to live with daughter Mary Susan Kee.

She was preceded in death by her parents, her husband C.G. Kee, her brothers Harold Isaac and Robert Isaac, and son James A. Kee.