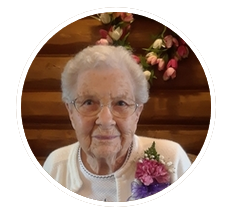 Ardis was born on January 7, 1919, in Sault Ste. Marie, Michigan to the late Angus and Emeline (Mitchell) Johnston. She graduated from Sault High School with the class of 1937. Ardis married Lloyd Bruno on August 8, 1940, in Sault Ste. Marie, Michigan. She was a member of the First Church of Christ and the Red Hat Society. Ardis enjoyed league bowling (which she did until age 94) and golfing (to age 92). She enjoyed going for walks, baking, traveling, and she was an avid reader. Ardis and Lloyd wintered in Florida for many years.

A graveside service will be held at 11:00 AM on Thursday, October 8, 2020, at Oaklawn Chapel Gardens, with Pastor Tom Cash officiating.