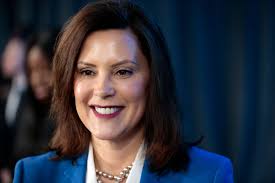 LEELANAU COUNTY, MI – A Michigan man has been charged after he allegedly harassed and spit on media members in attendance for a visit from Michigan Gov. Gretchen Whitmer.

According to the Leelanau County Sheriff’s Office, deputies responded to Discovery Pier in the 13000 block of S. West Bay Shore Drive in Elmwood Township on Thursday. Whitmer was in the area to sign a bill supporting outdoor recreation.

Shortly after deputies arrived, they located and identified a 39-year-old Traverse City man who allegedly got into a heated verbal disagreement with another person in attendance.

Their discussion was overheard by members of the media who came to observe, police said. Shortly after the arrival of the media, the man assaulted one member of the media by forcefully grabbing a microphone out of her hand and throwing it.

He also spit on another member of the media, police said. The suspect was arrested and transported to the Leelanau County Correctional facility.