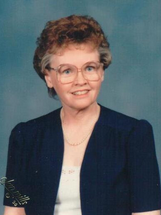 Dorothy was born on October 14, 1930, in Paducah, Ky to Armas and Nell (Pell) Mackie. The family moved to Sault Ste. Marie where Armas opened a family business.  Even though her parents warned her not to marry a “Yankee”, she met Otto Quack in high school and they were married on August 24, 1948.

Dorothy was a homemaker all of her life, the “glue” of the family. Dorothy was a Campfire Girls leader, a member of the Dorcas Ladies group, and a member of the Married Peoples group making many lifelong friends. Dorothy learned to ski after her children left home.  She and Otto were often seen skiing at the Finnish Ski Club in Sault, Ont.  Dorothy loved to read, particularly history books.  She loved antiques, which she bought and sold. Dorothy also loved bird watching.

Dorothy made many new, wonderful friends when she moved into McKinley Manor late in life.  She was often observed in McKinley Manor entertaining her many friends in the Dining Hall.

Dorothy was a beautiful gracious lady, a true “Southern Belle”.

In addition to her parents, Dorothy was preceded in death by her true love Otto Quack Jr. in 2011. Also preceding her in death were her son, Dennis Randall, and one daughter Lynn Denise.

The family would like to extend its gratitude to McKinley Manor, War Memorial Hospital, Dr. Chander, and Pastor Grundmeier for the outstanding care and compassion that Dorothy received.

The family is requesting in lieu of flowers, donations be given to Immanuel Lutheran Church.