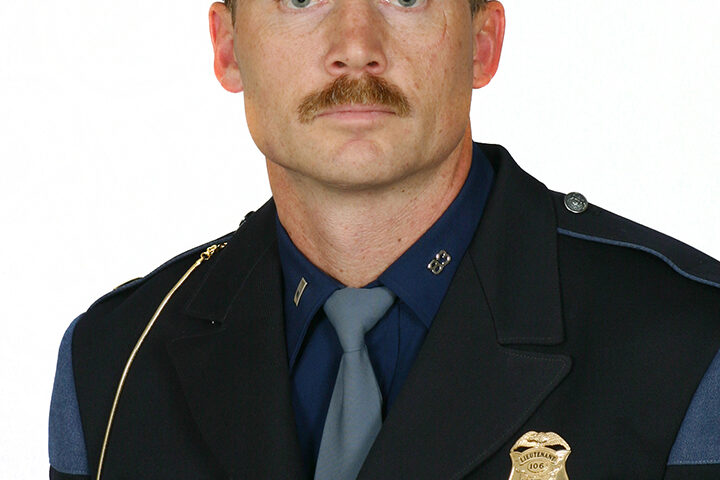 F/Lt. Shier, originally from Rockford, Michigan, graduated from Lake Superior State College with a bachelor’s degree in criminal justice, law enforcement. He began his career in law enforcement as a public safety officer with Huntington Woods Public Safety in 1988. In 1989, F/Lt. Shier enlisted in the Michigan State Police and graduated with the 106 th Trooper Recruit School. He was initially assigned to the Owosso Post where he served as a trooper until his promotion to detective sergeant at the Sault Ste
Marie Post in 1996. He investigated numerous cases to successful conclusion and mentored and provided assistance to troopers and other local law enforcement. Shier was an invaluable resource for the community, coworkers, the department, and his law enforcement colleagues. Shier promoted to first lieutenant in April of 2010, serving the St. Ignace Post and Manistique Detachment. He returned to the Sault Ste. Marie Post in March of 2016 as post commander where he finished his career.

Shier was honored with two professional excellence awards and a lifesaving award during his career with the MSP. Shier always executed his duties with the utmost professionalism and dedication to the department and the communities he served. The positive impact he has left on all those he touched is immense.

Shier continues to be rooted in the community through his membership in the Fraternal Order of Police, Lodge 115. He served with Northern International Crime Stoppers from 1996 through 2010 and is also a member of the Moose Lodge.

Shier and his wife Karen have been married 28 years and have raised a beautiful daughter, Courtney who is a law student at the University of Michigan.

We should all hope to aspire to leave our careers and workplaces better for our contributions as F/Lt. Joseph Shier leaves the Michigan State Police and the communities he served.

We would all like to thank F/Lt. Joseph Shier for his loyal and dedicated service and wish him the best in retirement.