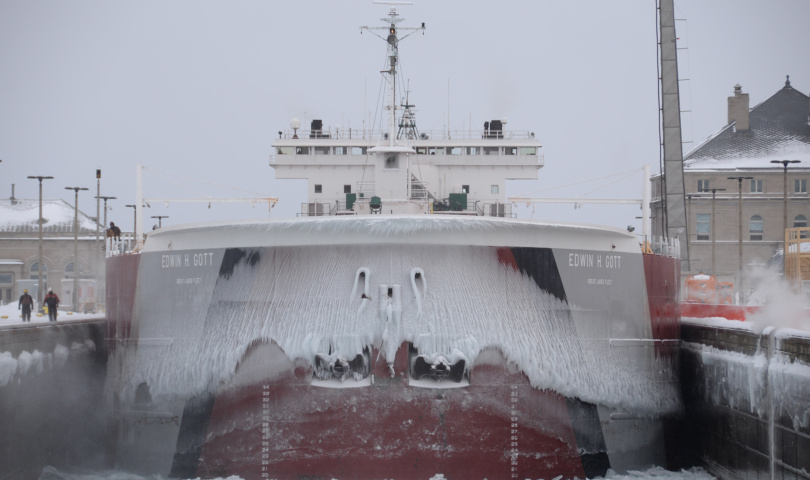 Federal regulation establishes the operating season based on the feasibility of vessels operating during typical Great Lakes ice conditions.

Every year, the Corps of Engineers uses the winter period to perform maintenance to keep the Soo Locks operating. The Detroit District team works long hours in extreme conditions to complete a significant amount of maintenance during this annual closure period. The work they perform is unique, especially given the harsh northern Michigan conditions they work in.

The Corps of Engineers has several projects to complete before reopening the Poe Lock in March. The MacArthur Lock is scheduled to open April 24.

“This winter a portion of maintenance projects on Gate 1 require the Poe Lock to remain full while others require the lock to be dewatered,” Maintenance Branch Chief Nick Pettit said.  “Sequencing Poe Lock maintenance/repairs allows our team to maximize the non-navigation season.”

Dewatering of the Poe Lock will begin February 13. The MacArthur Lock will not be dewatered this year.

The team will install a temporary panel bridge across the Poe Lock. This panel bridge will provide the ability to mobilize materials and equipment to the job sites throughout the winter closure.

In addition to the above, crews also perform a wide range of other maintenance tasks from fender timber replacements on the piers to inspections and preventative maintenance on electrical and mechanical systems on both Poe and MacArthur Locks.

Contractors are currently working on the Poe Lock ship arrestor project. OCCI of Missouri, was awarded the contract in July 2021, for $17.5M after awarded options. This winter they are finishing the new downstream arrestor equipment buildings, installing the new arrestor machinery and replacing the arrestor boom.

The Corps of Engineers is building a second Poe-sized lock to provide much needed resiliency in the Great Lakes Navigation System. The second Poe-size lock, 110-feet by 1,200-feet, is being built on the existing Davis and Sabin Locks sites. The Davis Lock, which opened in 1914, has not been used since 2018, and only to transport Corps vessels. The Sabin Lock opened in 1918 and has been inactive since 1989. Both the Sabin and Davis Locks are too shallow for most modern vessels.

The Corps of Engineers contractor completed the first phase of construction, the upstream channel deepening was completed in August. The project’s second phase to stabilize the existing upstream approach walls wrapped up the second year of construction. The contractor installed 26 coffer cells, completing all 52 and placed 31,000 cubic yards of concrete. The upstream approach walls work will resume in Spring 2023. The final phase of construction, constructing the lock chamber, was awarded in July with mobilization taking place in October/November.

“Watch the Detroit District Facebook page https://www.facebook.com/USACEDetroitDistrict for information about the last vessel to transit the Poe Locks for the 2022-2023 shipping season and updates about the maintenance work,” Chief Park Ranger Michelle Briggs said.

More than 4,500 vessels, carrying up to 80 million tons of cargo, maneuver through the locks annually. Iron ore, coal, wheat and limestone are among the most frequently carried commodities. Opened in 1969, the Poe Lock is 1,200 feet long. The MacArthur Lock was opened in 1943 and is 800 feet long.