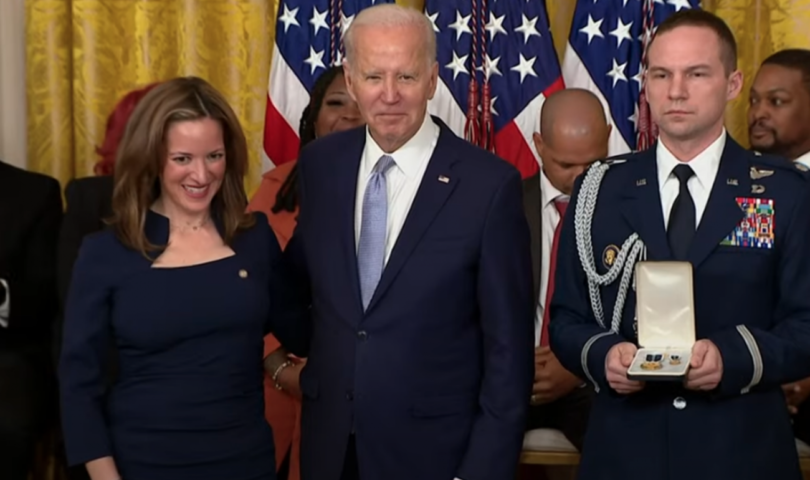 LANSING — Democratic President Joe Biden on Friday honored Michigan Secretary of State Jocelyn Benson for protecting the right to vote and withstanding “unprecedented pressure and threats” to overturn the 2020 election.

In a White House ceremony marking the two-year anniversary of Jan. 6, 2021, riots at the U.S. Capitol, Biden presented Benson and 11 others with the Presidential Citizens Medal, the second-highest civilian award a president can bestow.

Benson is a “true leader in our nation,” Biden said at the event, thanking the fellow Democrat for her work on the 2020 election, which Biden won by 154,188 votes despite former President Donald Trump’s false claims of widespread fraud.

“She oversaw a record number of Michiganders turn out to vote in that election only to find an armed mob outside of her home… when she and her son were decorating their Christmas tree inside, Biden said.

“But she refused to back down. She had done her duty. She kept her oath, full of integrity.”

Biden incorrectly said the protest took place on Christmas Eve. It actually occurred on Dec. 5, when roughly 20 to 30 Trump supporters gathered outside Benson’s home in Detroit, according to reports. Police said some of the demonstrators carried weapons. None was arrested.

The president presented the same award to a handful of other election officials, including Pennsylvania Republican Al Schmidt, along with several police officers who worked at the U.S. Capitol when rioters broke into the building as Congress prepared to certify the 2020 election results.

Benson oversaw Michigan’s 2020 election, which was administered by Democratic and Republican clerks across the state. In its aftermath, her office spearheaded efforts to combat misinformation and fight lawsuits from Trump allies who claimed the contest was rigged.

Benson’s decision to mail absentee ballot applications to every Michigan voter sparked outrage among Republicans, who argued it could open the door to election fraud, but the pandemic-era move survived a legal challenge.

After the election, however, a judge ruled that Benson had violated the state rule-making process by issuing unilateral guidance that instructed clerks to presume absentee ballot signatures were valid before scrutinizing them for obvious defects.

A Republican-led state Senate Oversight panel that spent months investigating the 2020 contest identified what it called “severe weaknesses” in the state’s elections system while concluding there was no evidence of widespread or systematic fraud in Michigan.

Benson, in a Thursday statement released ahead of the White House ceremony, said she was “deeply honored” by the award.

“This extraordinary recognition affirms in me the hope that we will emerge out of this moment with a democracy that has not only prevailed, but is stronger, healthier, and more robust than ever before,” she said.