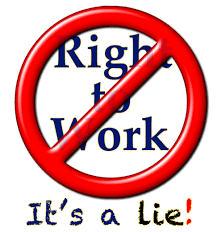 Democratic Michigan lawmakers say repealing the state’s “right to work” law is at the “forefront” of their agenda this term.

The 2013 policy bans making the payment of some union fees a condition of employment. It was a major Republican priority at the time.

State Sen. Darrin Camilleri (D-Trenton) is sponsoring a bill to undo some of those changes. He said the goal is for everyone to pay their fair share for negotiated benefits.

“So that when a union is doing their work on behalf of the entire workforce at a factory that everybody is benefiting from, that the union is also getting fair representation,” Camilleri said.

Camilleri’s bill and a similar one introduced in the House combine to apply to collective bargaining in both public and private sector jobs.

But, in 2018, the U.S. Supreme Court ruled against forcing public employees to pay union dues.

Camilleri argued it’s still worth repealing right to work for public employees in hopes of a different court ruling down the line.

“It is our hope and intention … that we will be repealing things that we know no longer hold statute based on either the state constitution or rulings by the Supreme Court just in the event that the U.S. Supreme Court changes their mind down the road that our laws will be ready so that working people can have a voice in the public sector unions too,” he said.

Union power in Michigan significantly diminished following the passage of right to work as thousands left their unions.

The Democratic plan for a repeal would be a heavy political lift to undo those changes.

For one, only Indiana has legislatively repealed its right to work law since 1965. Another state, Missouri, undid its law passed and signed in 2017 before it could take effect.

Camilleri said he expects “a lot of money” to get involved in the Michigan fight.

“The reason that this right-to-work law was instituted in the first place was to undercut the power of working people, to make it harder for unions to be formed and unions to stay organized. Because when unions are organized, workers can fight for good wages, good health care, good benefits, and safe workplaces,” he said.

Democrats won slim majorities in both chambers of the Legislature this past November. That means they’ll be facing a lot of opposition with only a few votes to lose.

Outside of business groups, some think tanks are also questioning whether it’s worth it to repeal “right to work.”

Critics have argued it adds to a freeloader problem where someone can benefit from union negotiations without contributing.

But Jarrett Skorup, with the Mackinac Center for Public Policy, said there are better solutions than a repeal.

“We would be supportive of a law that says you can opt out of union membership, and you can opt out of the contract. But unions oppose that. They want people to be — whether members or not — to be forced to contribute to the union,” he said.

Skorup said he sympathizes with those concerned about the freeloader issue. But he said only a fraction of union dues actually goes toward collective bargaining to begin with.

His main concerns with the Democrats’ effort come down to the personal freedom aspect of requiring workers to pay up and the economic impact he expects it to have on Michigan.

Skorup said it could especially impact the manufacturing industry.

While Democrats introduced the repeal as part of their first bills of the legislative session, they haven’t set forward a timeline for getting it passed.