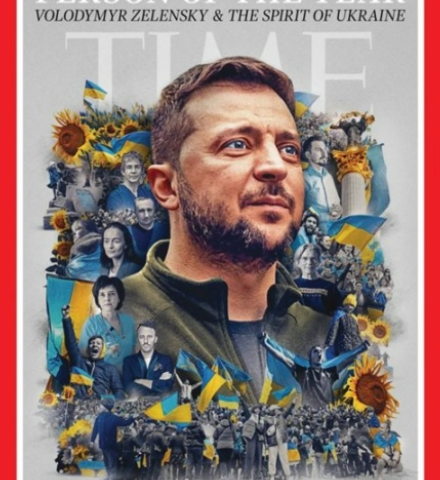 WASHINGTON — Ukrainian President Volodymyr Zelensky has been selected as TIME’s Person of the Year for 2022 because he embodies the spirit of Ukraine, according to the magazine.

“This year’s choice was the most clear-cut in memory,” TIME’s editor-in-chief, Edward Felsenthal, wrote in a letter about the decision. “Whether the battle for Ukraine fills one with hope or with fear, Volodymyr Zelensky galvanized the world in a way we haven’t seen in decades.”

A former comedian and television star, Zelensky rose to prominence in the west as Russia began making moves to invade its neighboring country.

As the early days of the war unfolded, Zelensky offered blunt but often reassuring and warm messages to his people, publicly speaking in frequent addresses even while assassins attempted to take his life.

His trademark olive-green shirt became a staple in his frequent addresses to the Ukrainian people and in photographs of him commanding Ukraine’s armed forces.

He has also become a frequent virtual guest for important western leaders, appearing in video conferences before the U.S. Congress and the United Nations in attempts to secure resources and support for his troops.

Before Russia invaded Ukraine earlier this year, analysts both inside Moscow and in the west believed the war could be short, with Russia steamrolling Ukrainian defenses. But within days of the conflict’s outbreak, Ukrainian troops proved that would not be the case.

Even before the mass mobilization of weapons from allies such as the U.S., Ukrainian forces were able to stall Russia and prevent them from taking the capital city of Kyiv.

In the ensuing months, Ukraine held Russia to a battlefield stalemate before launching a counteroffensive in the late summer that saw them retake kilometers of area occupied by the Russians for months.

In the most recent high-profile liberation, when Russia abandoned Kherson, Zelensky made an unannounced trip to the city days after it was recaptured. He told TIME that his security was against the trip because there was no guarantees of his safety in a just de-occupied area.

But he went anyway.

“Nine months they’ve been under occupation, without light, without anything. Yes, they’ve had two days of euphoria over their return to Ukraine. But those two days are over,” he was quoted as saying in TIME’s profile on him. “They are going to fall into a depression now, and it will be very hard. As I see it, it’s my duty to go there and show them that Ukraine has returned, that it supports them. Maybe it will give them enough of a boost to last a few more days. But I’m not sure. I don’t lull myself with such illusions.”

Zelensky wasn’t the only person considered for the honor. Notable figures such as Elon Musk, Xi Jinping, the Supreme Court, Liz Cheney, MacKenzie Scott, protesters in Iran, Ron DeSantis and Janet Yellen were all on the shortlist for Time’s 2022 Person of the Year..

The title, which is bestowed at the end of the year by TIME’s editors, is not necessarily an honor. It is the magazine’s attempt to highlight the person who has had the most influence on the world over the past year, and has increasingly in recent years been used to highlight those whose year in review appears to be an example of more influence moving forward.

Last year’s honoree was Elon Musk, who continued to dominate headlines this year and was on the shortlist for 2022 as well.

The cover showcasing Zelensky features a portrait of his face, surrounded by the faces of Ukrainian people and symbols of the country, including its blue and yellow flag.