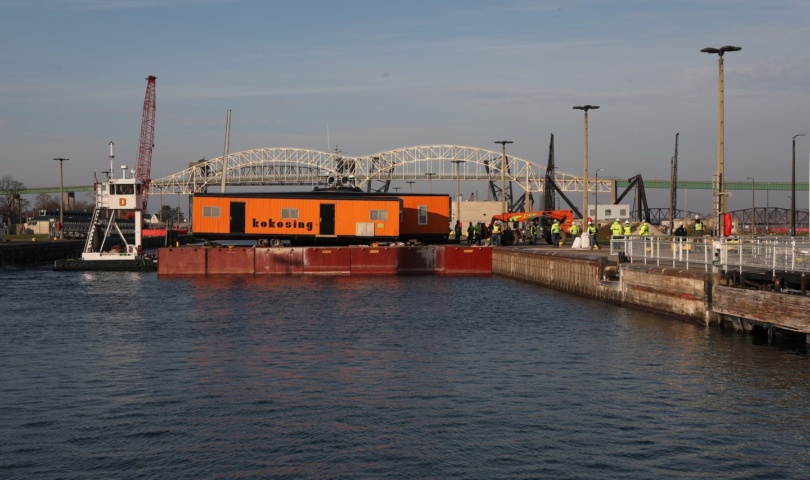 SAULT STE. MARIE, Mich., —The U.S. Army Corps of Engineers kicks off Phase 3 construction for the New Lock at the Soo as the contractor mobilizes to the Soo Locks.

Kokosing Alberici Traylor, LLC (KAT), a joint venture headquartered in Westerville, Ohio began moving major equipment to the site via a barge in the Poe Lock on November 3 in between shipping traffic. Mobilization of equipment for Phase 3 marks a big milestone for the project.

The Soo Locks will remain operational during construction of the New Lock at the Soo and without interruptions to shipping traffic.

“KAT started their major mobilization this week with moving project trailers to the site,” Rachel Miller, New Lock at the Soo Supervisory Civil Engineer said. “They previously moved smaller pieces of equipment and have worked over the summer preparing the grounds for upcoming work.”

KAT will set up the trailers in preparation for the coming winter season. No major construction for Phase 3 will take place until Spring due to the harsh winter climate in the Upper Peninsula of Michigan.

“The Detroit District is looking forward to working with KAT on Phase 3 of the New Lock at the Soo,” said Mick Awbrey Chief of the Integrated Project Office. “We recently had a partnering and pre-construction meeting with the contractor to collectively work towards becoming a World Class team.”

“We appreciate the collaboration and communication with our Stakeholders and KAT Partners,” said Lt. Col. Brett Boyle, District Commander. “The team is fully committed to safely delivering a quality New Lock.”

The Soo Locks are situated on the St. Marys River at Sault Ste. Marie, Michigan, and allow vessels to transit the 21-foot elevation change at the St. Marys Falls Canal. Over 88% of commodity tonnage traveling through the Soo Locks is restricted by vessel size to the Poe Lock. The New Lock at the Soo project is constructing a second Poe-sized lock (110 feet by 1,200 feet) on the existing decommissioned Davis and Sabin locks site. The Soo Locks are a nationally critical infrastructure and this critical node’s reliability in the Great Lakes Navigation System is essential to U.S. manufacturing, according to a 2015 Department of Homeland Security study on impacts of an unexpected Soo Locks closure.

For more information about the New Lock at the Soo project, visit our website: https://www.lre.usace.army.mil/About/Highlighted-Projects/New_Soo_Lock/