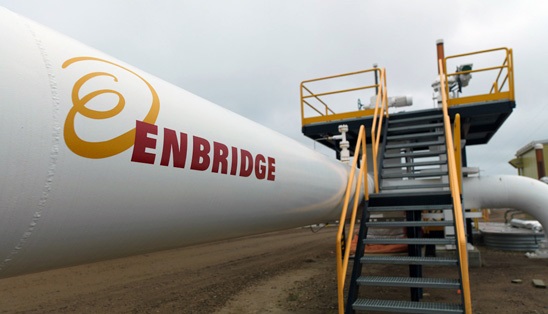 GRAND RAPIDS, Mich. (WOOD) — Enbridge has cut the ribbon on its latest security check on Line 5. A ceremony was held Thursday at the Straits Maritime Operations Center in St. Ignace.

The facility has seven staff members, scheduled to monitor Line 5 and the Straits of Mackinac around the clock.

“We do long-range planning, so nobody sneaks up on us,” Mike Davanzo, maritime operations specialist, told NBC affiliate UpNorthLive. “We know when they’re coming. We know 24 hours in advance, people that are projected to cross the Straits. And then we watch them as they proceed through the Saint Mary’s River, up to Lake Michigan, up Lake Huron. And then we get the alert when they’re in the area and we start monitoring them when they trigger that alert.”

According to a news release from Enbridge, those alerts come from the “Guardian Protect System” that also notifies ships about that they are entering a “no anchor zone.” The ESMOC also runs two high-resolution radar scanners, weather monitoring tools and high-definition cameras at specific locations throughout the Straits.

A company spokesperson said Enbridge put an emphasis on implementing “extraordinary measures” after Line 5 was damaged by an anchor strike in April 2018. The 15,000-pound anchor dented both pipelines and caused approximately 600 gallons of insulation fluid to leak from electrical cables that run along the lake bed.

Enbridge spent approximately $50 million on the ESMOC, but still believes it is an “immediate, near-term solution” for monitoring the Straits of Mackinac. The company contends the safest plan for the Great Lakes is to build a new pipeline in a tunnel underneath the Straits.

“Enbridge has made a commitment to the State and its residents that we will pay for and build the tunnel project. We believe it’s the best way to protect the environment while still keeping (the) energy flowing safely to the State and region,” a spokesperson said in a release.

Many environmental groups have long pushed against that narrative, saying Michigan and the Great Lakes region don’t need to rely on Line 5 for fuel and the risk Line 5 or the prospective tunnel project poses far too great a risk to the Great Lakes environment and economy.

“The drilling of this tunnel could very easily cause a Line 5 spill,” Sean McBrearty, the legislative and policy director for Clean Water Action, told News 8 in June. “The risks of explosion, safety concerns about operating an oil and gas pipeline in a confined space under the Great Lakes, and the fact of Enbridge’s abysmal safety record including the 2010 Kalamazoo River oil spill all deserves closer scrutiny.”

In July, the Michigan Public Service Commission pumped the brakes on Enbridge’s tunnel project, voting unanimously to request more specific information about how construction on the tunnel could impact the current Line 5 pipelines.