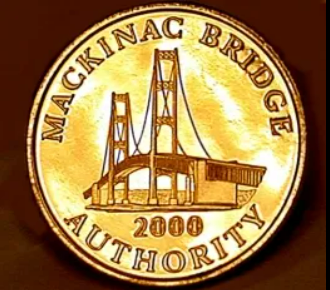 ST. IGNACE, Mich. ­- Discontinued for use in toll lanes three years ago, bridge tokens will no longer be refunded at the Mackinac Bridge after Dec. 31, 2022.

Due to dwindling demand, the Mackinac Bridge Authority (MBA) stopped accepting bridge tokens in the toll lanes as of Sept. 10, 2019. Interest in redeeming tokens has also diminished since then and MBA officials believe less than 1 percent of all tokens issued remain in circulation.

“Only a few customers bring in tokens anymore for reimbursement and there is quite a paperwork process each time they do,” said MBA Bridge Director Kim Nowack. “We’ve given customers three years to sell back their tokens to us and it’s time to turn remaining tokens into collectors’ items.”

Until Dec. 31, customers can redeem bridge tokens at the MBA office at the north end of the Mackinac Bridge. Though many tokens were purchased for a much lower cost, they may be redeemed at the full price of $4 for the first 24 tokens and $1.50 per token thereafter.

The MBA has issued many different versions of the tokens over the years, available in rolls of 24. Commemorative token sets of two memorializing people such as Prentiss Brown and David Steinman, as well as eight different designs in honor of the Mackinac Straits ferries, will still be available for purchase as keepsakes: https://www.MackinacBridge.org/Shopping/Token-Gift-Packs-Medallion/.