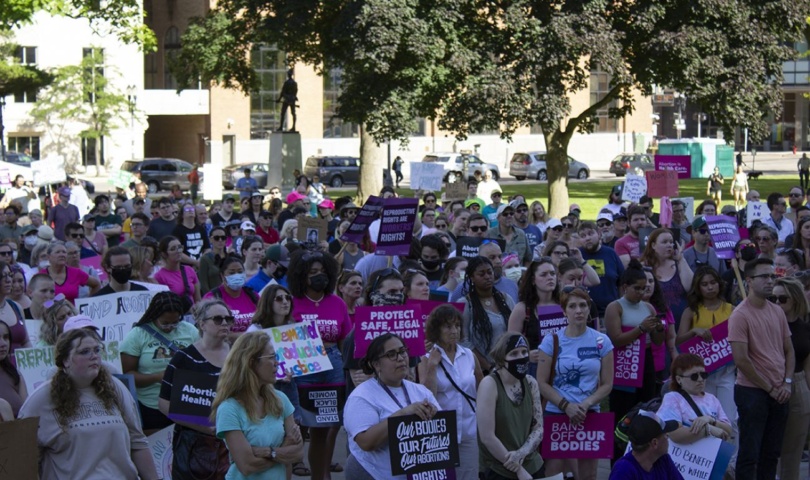 An existing law criminalizing most abortions in Michigan is unconstitutional and shouldn’t be enforced, Court of Claims Judge Elizabeth Gleicher ruled.

In an opinion issued Wednesday afternoon, Gleicher said enforcement of the long-dormant ban on abortions except for life-threatening pregnancies would mean Michigan women would be “denied appropriate, safe and constitutionally protected medical care” and endanger the health and lives of people seeking to exercise their constitutional rights.

Gleicher concluded that enforcing the existing law, last updated in 1931, would deprive pregnant people of their right to bodily autonomy and equal protection.

“Despite that men play [a] necessary role in the procreative process, the law deprives only women of their ability to thrive as contributing participants in [the] world outside the home and as parents of wanted children,” Gleicher wrote.

The order doesn’t change the status quo on abortion access in Michigan. Abortions are currently allowed under an injunction an Oakland County judge issued last month.

However, the recent ruling does include a permanent injunction barring the Michigan Attorney General’s office from enforcing the existing law, an important distinction since the Supreme Court decision overturning Roe v. Wade was handed down in June.

Michigan’s 1931 law, if re-enacted, would make it a felony for anyone to perform an abortion in the state. The only exception would be to preserve the life of the mother.

Violations would be punishable by up to four years in prison and/or a fine of up to $5,000. Physicians who perform abortions could also face administrative penalties from the state, including revocation of medical licenses. Clinics, too, could face penalties.

Wednesday’s ruling “will ensure that Michiganders can continue to make deeply personal decisions about their health, lives and futures without interference from state officials,” Wallett said in a statement.

On the other hand, opponents of abortion argued that Gleicher, a Planned Parenthood donor who represented the organization in the past, shouldn’t be hearing the case. Gleicher declined to remove herself from hearing the case, saying she could remain impartial.

In addition, the Michigan Legislature previously asked an appeals court to overturn the initial injunction that was blocking the ban from being reenacted, arguing that Gleicher made “myriad errors” and engaged in “extreme judicial overreach.”

A spokesperson for the House Republican caucus said lawmakers are currently reviewing the latest ruling.

A Court of Appeals panel ruled last month that Gleicher’s initial injunction did not apply to county prosecutors, although a separate injunction issued in another case blocked Republican prosecutors from enforcing the existing ban.

In her Wednesday brief, Gleicher wrote that her ruling “does not conflict with” the Court of Appeals order and ordered the Attorney General’s office to notify all county prosecutors that the law is unconstitutional.

Gleicher’s decision is far from the final say on abortion access in Michigan, as appeals are expected and additional challenges to the law remain pending.

A separate challenge to the 1931 law filed by Gov. Gretchen Whitmer began in Oakland County, but she has asked the Michigan Supreme Court to step in and fast-track a decision on whether the current language in the state constitution provides a right to abortion in the state.

Oakland County Circuit Judge Jacob Cunningham granted a request from Gov. Gretchen Whitmer’s legal team and issued a preliminary injunction to block enforcement of Michigan’s 1931 ban on abortion, noting enforcement of the statute would be “dangerous and chilling.”

The question of whether a proposal that would enshrine abortion access in the Michigan Constitution qualifies for the 2022 ballot is also before the Michigan Supreme Court, after the Board of State Canvassers deadlocked on approval last week.

Supporters of the change collected a record number of signatures to qualify for the ballot. But opponents to the ballot proposal argued a lack of visible spacing between words in the proposal circulated to voters made it difficult to understand and should disqualify it, an argument the board’s two Republicans supported.

The state Supreme Court is expected to make a determination by Friday, court spokesperson John Nevin confirmed with Bridge on Wednesday.

But a ruling in favor of rejecting the measure from the ballot would set “the most dangerous precedent I can possibly imagine,” Michigan Attorney General Dana Nessel said during a Wednesday press conference.

It would allow state canvassers to keep initiatives off the ballot based on “brand new requirements” they created or simply because one political party dislikes the proposal or fears the issue may drive voter turnout to benefit the other party, she argued, adding, “I can’t think of anything more undemocratic than that.”