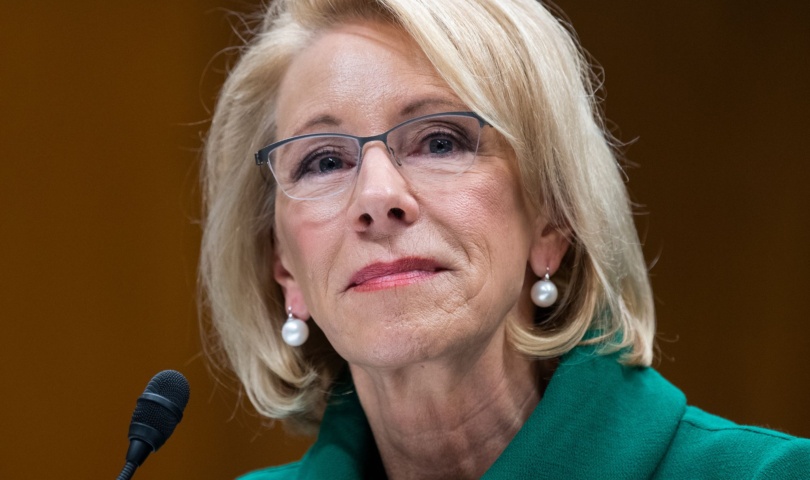 Former U.S. Education Secretary and Michigan native Betsy DeVos says President Joe Biden once greeted her in a manner that would fit the definition of sexual harassment under rules his administration has proposed for college and university students.

DeVos said that before Biden was president, he approached her at a speaking engagement, while she was using a wheelchair to recover from a broken pelvis. The two had not met previously, she said.

Biden placed his hands on her shoulders, so she had “nowhere to go to or escape,” and pressed “his forehead on my forehead” for several seconds, DeVos said on “The Megyn Kelly Show” podcast on SiriusXM, aired Thursday.

“If he had done that as a student on a college campus, under his proposed rule, I would have a Title IX sexual harassment allegation to levy against him, because of his conduct,” said DeVos, a billionaire businesswoman and significant donor to conservative and Republican causes, including right-to-work legislation and use of public dollars to support private schools.

It was not immediately clear whether such conduct would meet the definition of sexual harassment under the proposed rules.

DeVos did not say exactly when the incident happened, but news reports show she was using a wheelchair in January 2019, while a member of former President Donald Trump’s cabinet.

DeVos told Kelly she cited the incident as an example to illustrate how the Biden administration’s Title IX proposals go too far. The White House “is so bent on trying to politicize and weaponize a law that was meant to protect women and give them access to education, not to weaponize it to harm others.”

Biden has been accused of being overly handsy in his greetings with women and girls in the past, including allegations of unwanted touching. A Biden spokesman did not immediately respond to an email and phone call seeking comment.

The Department of Education said in June it wants to reinstate Title IX regulations tossed out by the Trump administration, when DeVos was in charge of education policy.

Proposed rules would provide stronger protections against sex and gender discrimination on college campuses, as well as for anyone who claims they were the victim of sexual assault on campus.

The changes seek to overhaul a federal rule known as Title IX, which mandates federal regulations that affect men’s and women’s college athletics teams, how universities investigate sexual assault on their campuses and protections for transgender or gay students.

Regulations introduced under President Trump required hearings on sexual violence accusations and limited the type of incidents universities could address.

Proponents say the new rules would provide needed protections for transgender students and others.

DeVos said that during her encounter with Biden, he asked her whether she had received any “hardware” as part of the treatment for her injury. She said he told her that he had once received nine screws in his shoulder, “but everyone thought they were in his head,” she said.