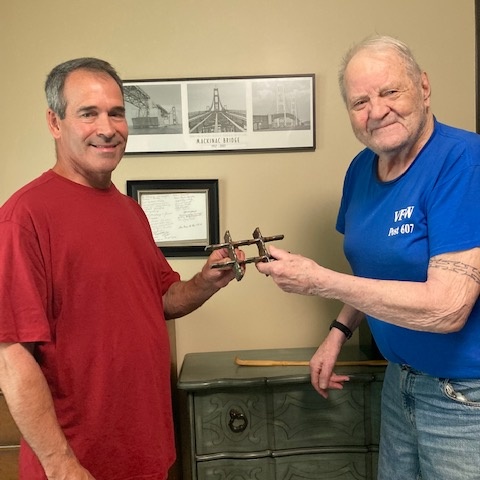 ST. IGNACE, Mich. – Jack R. Thompson, 93, of Alpena, has always been a part of the Mackinac Bridge since 1956 when he worked on a construction crew that built it. Now he has a part of the bridge with him as well.

Thompson, who received a piece of the Mighty Mac’s original deck grating from Bill O’Neil, maintenance director of the Besser Senior Living Community where he now lives, cherishes the gift.

“I can’t explain what a wonderful feeling it is to have a piece of the actual bridge,” Thompson said. “It brings back great memories.”

For his part, O’Neil was pleased to take Thompson on a trip through those memories from 1956, when he worked as part of a crew that strung the 42,000 miles and 11,840 tons of cables that suspend the bridge.

“I travel between the Upper and Lower Peninsula of Michigan every week and I often think about the men and women who built the Mackinac Bridge,” O’Neil said. “I feel honored to be able to bring a piece of the bridge decking back for Jack as a reminder of his work and of the great friends he met on the bridge.”

After working on the bridge, Thompson took a job in his hometown of Alpena and hasn’t traveled much over the years; he last crossed the bridge in 1960. Still, he’s proud to be a part of that history, connecting the state’s two peninsulas, and a bridge that recently saw its 200 millionth crossing.

“It is really cool. I was just one man, and there were so many who worked to build the bridge,” he said. “It was a great experience, and I met a lot of great people.”

Small pieces of the original bridge grating, created as part of an ongoing project to replace those as needed, are now on sale again at the Mackinac Bridge Administration office in St. Ignace.

Grating pieces cost $20 each, and customers are limited to three pieces each. Pieces are roughly 5 inches by 11 inches and 5 inches by 8 inches; they may exhibit rusting and traces of lead paint. All pieces are sold “as-is.” Purchasers must sign a liability disclaimers/hold harmless agreement. No online sales or reservations are available, and sales are limited to stock on hand.

Large pieces of used grating are available for auction at www.GovDeals.com as they become available.