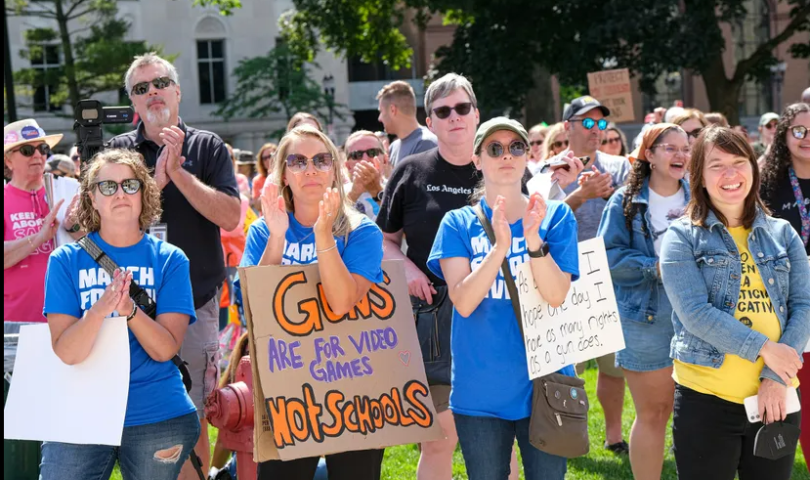 That was the prevailing message at Saturday’s March For Our Lives rally on the steps of the Michigan Capitol, part of a nationwide series of protests. About 500 people gathered in Lansing to demand lawmakers take action to pass stricter gun laws.

“How many more (shootings) until our politicians do anything?” asked Neelufar Jaberi, an Okemos High School senior and co-captain of the Lansing chapter of March For Our Lives.

Jaberi said she’s tired of lockdown drills being second nature and the fear her school will be next to have a shooting. She doesn’t want to have an escape plan in each of her classrooms, a plan of what to do if a shooter walks in, she said.

Jaberi was 7 when 20 kids and six adults were killed at Newtown, Connecticut’s, Sandy Hook Elementary School in 2012. Now 17, she sees a new generation of children being traumatized by school shootings. Knowing nothing has been done since the Sandy Hook attack makes her angry, she said.

“I feel all the rage in me building,” Jaberi said. “I get so angry and frustrated that politicians can look the other way and let this happen.”

Anthony recalled giving a commencement speech as a senior at Everett High School in Lansing. The Columbine High School shooting had taken place in Colorado Duringher High School tenure and she wondered when adults would do something to fix things.

Two decades later, Anthony again gave a commencement speech at Everett, less than two weeks after 19 students and two teachers were killed at a school in Uvalde, Texas.

“What will it actually take?” Anthony asked. What will it take to not have more people killed in grocery stores, in school and on city streets?

Willis, who also was a student at Everett when the Columbine attack occurred in 1999, said people need to put children’s safety above their right to have guns, she said.

“Fear and active shooter drills have no place in our schools,” Willis said.

Riley, a 10-year-old Milan girl said she and her friends — or anyone her age — should not have to be scared about guns in schools.

Her aunt attended the rally and Riley said she asked her aunt if she could speak. She introduced Stabenow during the rally.

Riley said while she is a little nervous about a shooting happening at her school, she knows her teacher will protect them. Her teacher keeps a metal bat in the classroom, Riley said.

Whitmer, who spoke with her daughter standing by her side, advocated for storage laws, universal background checks, more mental health professionals and investing in school buildings and programs.

She said her worst days as governor included the day of the Oxford High School shooting and those that followed. When parents send their children to school, Whitmer said, they’re sending a piece of themselves and are trusting they’ll come home safe.

“Doing nothing is not acceptable,” Whitmer said. “It’s unconscionable to continue doing the same thing and think things are going to get better. … We cannot forget. We cannot look away. We cannot check out.”

The U.S. House of Representatives approved a package of bills on gun safety Wednesday that included gun storage legislation Slotkin introduced after the Oxford shooting.

Her bill requires that firearms be securely stored in households where kids could reasonably access the weapon. Adults could face prison time if their child uses the gun to hurt themselves or others or if it is used in a crime.

Slotkin said Saturday she doesn’t have high hopes the package will move forward in the Senate.

Slotkin chastised politicians, gun advocates and anyone who has refused to take action to make guns safer.