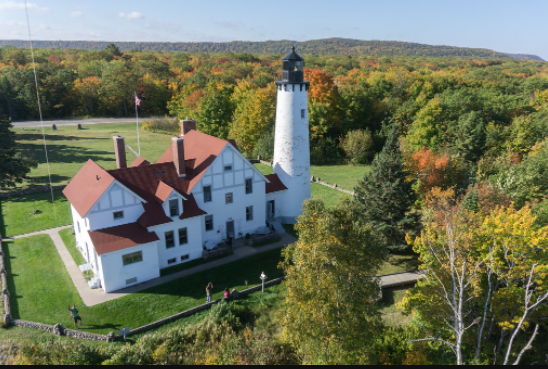 BAY MILLS — After years of discussion, a partnership between Bay Mills Indian Community and the US Forest Service has come to fruition. BMIC  has entered into an interpretive agreement, which will empower Bay Mills to oversee the operations at Point Iroquois Lighthouse in Brimley, on the shores of Lake Superior.

The Bay Mills Executive Council reviewed and approved the agreement in 2020, but when the pandemic hit, plans were put on hold.

Finally, this summer, Bay Mills will open the lighthouse on June 15 and museum under the lead of Museum Director Candice LeBlanc.

“The area surrounding Point Iroquois Lighthouse has rich cultural and historical significance to the Anishinaabe. Recently, the museum has focused on maritime history and the way of life of a 1950s lighthouse caretaker. This collaboration means the Bay Mills Indian Community can tell its story and share Anishinaabe history, cultural information and artifacts at the lighthouse,” said Kari Thompson, Recreation Program manager for the East Zone of Hiawatha National Forest. “The US Forest Service looks forward to furthering its relationship with Bay Mills Indian Community through this partnership.”

The tribe looks forward to bringing Native history and perspective to the highly trafficked historical area, which was placed on the National Register of Historic Places in 1970. The lighthouse is named after the 1662 battle between the local Anishinaabe from Bay Mills and an invading Iroquois war party. The battle halted westward expansion with a Bay Mills victory.

On average, nearly 40,000 people make a stop at the lighthouse. Visitors often marvel at the lighthouse itself, unaware of the rich history behind the structure and the land. Bay Mills hopes to enrich and educate visitors to the area about Pt. Iroquois’ historical prominence.

“The hope for Bay Mills’ partnership with the US Forest Service in managing Pt. Iroquois Light house is to create an inclusive and welcoming space, which allows for visitors to learn of the connections of the past to our people’s present and the importance of the connection between the land, our community, and Anishinaabe culture,” said LeBlanc. “The vision is to create and build a place of learning, connection, and appreciation for Anishinaabe people and Bay Mills Indian Community.”

The museum hours will be 10 a.m. – 4:30 p.m. Tuesday through Saturday, closed Sunday and Monday. There will be live exhibitions scheduled throughout the summer, including Lacrosse, black ash basket and pottery making. LeBlanc is also building a list of community volunteers of people to visit with travelers and tend to the grounds. She can be reached via e-mail at cmleblanc@baymills.org.