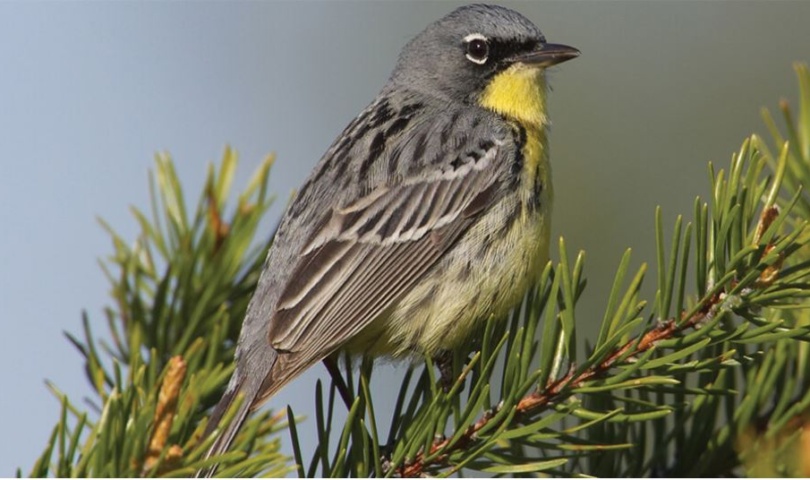 The Kirtland’s warbler is a small gray and yellow bird which happens to be one of the rarest songbirds in North America. These birds are very particular about establishing nests and rearing of the next generation of birds. This warbler nests at the base of trees along the edges of newer, and fairly dense, Jack Pine stands which have a particular biology all their own. Suitable Jack Pine stands have been found in Northern Michigan as well as parts of Wisconsin and Ontario, but due to increasing human population and its associated impact on forest management this habitat has become harder to find.

The Jack Pine is a coniferous tree and is a fire dependent species. This means that it has serotinous cones which require heat to open and release viable seeds. Historically, this heat is provided by periodic fires on the landscape. These large forest fires are less common now due to managing forests for human and property safety. Conservation specialists and foresters have developed new methods of planting which can mimic this type of fire disturbance by way of clearcutting and replanting to maximize forest edges and ensure proper density for nesting.

The Kirtland’s Warbler spends the winters in the Bahamas and migrates to Northern Michigan to build its nest on the ground. They begin nesting in a Jack Pine forest when the trees are 5-6 feet tall and around 7 years old. They will use this forest until the trees reach 10-16 feet in height and are around 20 years old. After that point the trees are likely too tall to provide the proper protection and desirable habitat and the birds will look for a younger stand of Jack Pine. The ideal density for nesting is too tight to provide desirable lumber from the planting, which has caused some difficulties in optimizing the land use for both protection of bird habitat and effective use of the biomass provided by the trees.

Large-acre plantings of Jack Pine have been the focus for many conservation agencies over the past few decades which have improved the outlook for the Kirtland’s Warbler longevity. Plantings this spring in Northern Lower Michigan have established over 6,000 acres of new habitat which will be ready to provide nesting locations in about 7 years. Conservation efforts like this have helped increase the population from 200 birds to an estimated 3,000 birds and have played a vital role in their graduation from the endangered species list to a threatened species.