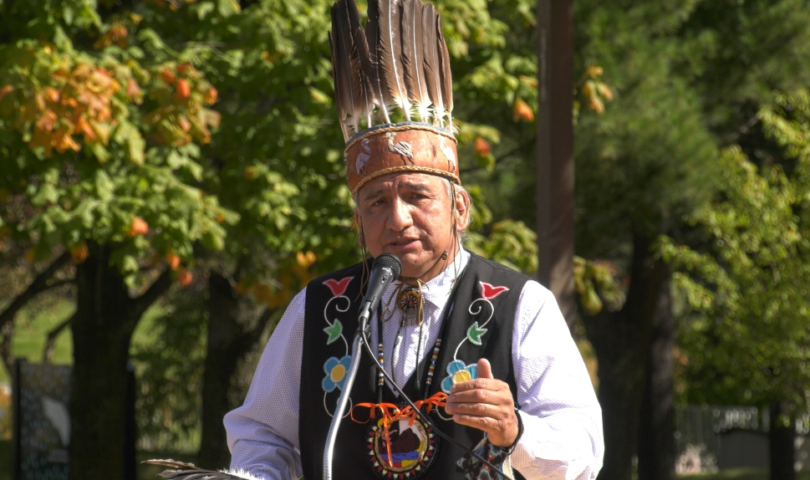 At city hall, local dignitaries gathered for a flag-raising ceremony during which an orange flag bearing the words “Every Child Matters” was raised next to the Canadian and Ontario flags.

Garden River Chief Andy Rickard was among those speaking at the ceremony. He spoke of Canada’s residential school history, often fighting back tears as he delivered his remarks.

“The truth hurts and we have to acknowledge that truth, and we have to talk about it no matter how uncomfortable it is,” Rickard said. “I think what was equally hard for me was when I seen my wife and my children in the crowd. And just to imagine what our people went through, especially our grandparents or relatives, of having…being ripped away from their parents and brought to a school.”

Cathy Syrette, executive director of the Sault Ste. Marie Indigenous Friendship Centre, also spoke at the ceremony. She said her organization often works with survivors of residential schools, one of which was present at the ceremony.

“There was a school survivor here today that had a difficult time, but we had a youth person who had ceremony and they smudged with her, and she was shedding a lot of tears here today,” Syrette said. “We want to wrap our services and our arms around those individuals that do have a hard time.”

Chief Dean Sayers of Batchewana First Nation used his time at the podium to deliver a fiery speech, rallying Indigenous people to reclaim their heritage.

“Come hell or high water, we will reclaim our inherent obligations, our jurisdictions,” Sayers said. “We don’t need the support of the foreign government, we will do it. And if the Government of Canada doesn’t like it, make a land claim to us. Make a specific claim to us. We’re not going to claim anymore in their systems. It’s ours and we’re taking it back.”

In his remarks at city hall, Rickard called on Canada to stand with Indigenous Peoples as they move on from a painful history to reestablish a balanced and healthy nation.