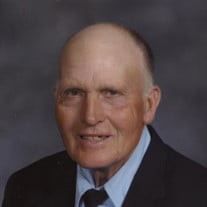 Ron was a lifetime resident of Pickford, who still lived on the same farm where he grew up. He was a graduate of the Pickford High School Class of 1963. Over the years, Ron worked at Huyck’s Poultry Farm, Cedarville Limestone Quarry, and for John S. McDonald on his horse farm, all while always working his family dairy farm.

Ron was an active member of the New Horizons Church of the Nazarene where he served on the church board and served as Sunday School Superintendent for many years as well as teaching Sunday School and serving as an usher. He was also a member and served on the boards of Marquette Township Zoning Board, Northwoods Christian Camp, and the local Chapter of Farm Bureau. He was a lifetime member of the Pickford Historical Society.

In addition to farming, Ron enjoyed being in the woods where he enjoyed cutting wood. When inclement weather forced him indoors, he enjoyed reading (newspapers, farming magazines, and his Bible) and piecing jigsaw puzzles. He enjoyed helping people and was eager to lend a helping hand where needed.

Burial will be in Cottle Cemetery, Marquette Township in Pickford.