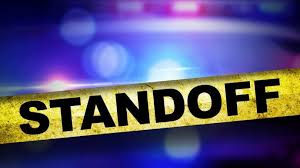 ALPENA COUNTY, MI. The Michigan State Police (MSP) Emergency Support Team (EST) and troopers from the MSP Alpena Post responded to a residence on US-23 in Ossineke for barricaded gunman last week. The incident led to a standoff that lasted several hours. It ended when the suspect surrendered later that evening.

On Thursday, October 21, 2021, at approximately 4:00 p.m. troopers were dispatched to a possible domestic assault at an address on US-23 in Ossineke. The first call came from a man at the residence and later a woman called. The man called to say his wife was intoxicated and on drugs. She had been abusive in the past. The woman called and said her husband had choked and pointed a gun at her. The wife was now being held hostage. Troopers set up a perimeter and attempted to talk to the husband, who refused to come out.

The MSP EST was activated. Negotiators were talking to the husband while the wife was upstairs communicating with 911 dispatchers. The husband, 53-year-old Mark Dwayne Deckard, eventually surrendered and was placed under arrest. His wife was transported to MidMichigan Medical Center where she was treated and released for non-life-threatening injuries.

Deckard was arraigned today in the 88

th District Court in Alpena for one count Domestic Violence, one count Unlawful Imprisonment, one count Felony Firearm, one count Assault with a Dangerous Weapon, and one count Assault with Intent to do Great Bodily Harm less than Murder. His bond was set at $500,000 cash surety. His next scheduled court appearance is on November 15, 2021, at 2:00 p.m. Troopers were assisted at the scene by the Alpena County Sheriff’s Office, Sanborn Township Fire
Department and Alpena City Ambulance.