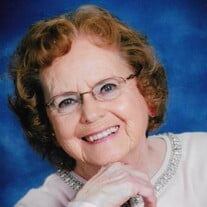 Heaven gained a bright angel on Saturday, October 23rd, 2021. Lonia Mae Rambo Brisson was born on May 14, 1932 in Park Rapids, Minnesota, and raised in San Diego, California, where she attended Our Lady of Peace Academy for 12 years. She made many lifelong friends and returned to San Diego for reunions into her eighties. She met the true love of her life, Jim Rambo, while he was serving in the Navy and was stationed in San Diego. They met at the neighborhood drug store, their favorite hangout. Jim proposed to Lonia at her Senior prom and they were married November 5, 1950.

While in San Diego, Lonia gave birth to twin girls, Roxanne and Maryanne (Maryanne did not survive birth). Paul was born fourteen months later. Soon after, Jim was transferred to Jacksonville, Florida, where Diane was born. After 10 years of Naval life, Lonia and Jim decided to move back to Lansing, Michigan, where Jim joined the Michigan State Police and where Greg was soon born. Jim’s career kept them moving from Lansing to Bay City (4yrs) to Houghton Lake (4yrs) and then to Sault Ste. Marie in 1966. All while giving birth to Tom, Dan, and Jason along the way. After Jim died in 1983, Lonia went on to pursue her love of traveling and following her children in their sporting endeavors. She traveled to Spain, Hawaii, and on numerous cruises. Lonia won trips and prizes when she appeared on Wheel of Fortune. She also appeared on the Price is Right, but did not make it on to the stage.

In 1995, she met and married Clem Brisson. She enjoyed her life traveling back and forth from Sault Ste. Marie to Apache Junction, Arizona, in their motorhome. After 15 years of marriage, Lonia again became a widow. The rest of her years were spent enjoying her family.

She was an active member of St. Joseph’s Catholic Church, long standing member of the War Memorial Hospital Auxiliary, a knighted member of the madrigal dinner for Hospice, a volunteer for the Jerry Lewis Telethon, a member of the Gazelles of the Elks, and a member of the Sault High Booster Club. She loved playing bridge in numerous bridge clubs, both in the Sault and Apache Junction.

She is predeceased by both husbands (Jim and Clem), her mother and father (John and Loni), three brothers (Jackie, Thomas, and Ronnie) and two sisters (Julie and Peggy). Visitation for Lonia will be Wednesday October 27, 2021 from 6:00pm until 8:00pm at St. Joseph’s Catholic Church, 1101 Minneapolis St Sault Ste. Marie, MI. Mass of Christian burial will be Thursday October 28, 2021 at St. Joseph’s Catholic Church at 11:00am with Father Romeo Cappella officiating. Lonia’s final resting place will be at Chapel Hill Memorial Gardens in Lansing, Michigan, with her beloved Jim.
Memorial contributions can be made in Lonia’s honor to Hospice of the EUP, 308 W. 12th Sault Ste. Marie, Michigan 49783. Clark Hovie Galer Funeral Home assisted the family with arrangements.