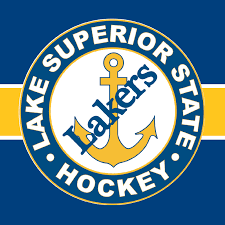 SAULT STE. MARIE, Mich. – The Lake Superior State hockey team earned a weekend sweep over St. Thomas in the team’s first home series of the 2021-22 season with a 6-3 win in the Taffy Abel Arena on Saturday, Oct. 16. With the Central Collegiate Hockey Association (CCHA) victory over the Tommies, the Lakers overall record improves to 3-3-0 and hold a 2-0-0 record in conference play.

The Lakers took the game’s first lead at 6:53 of the first period when freshman forward Dawson Tritt scored his first goal on Laker ice to give the team a 1-0 lead. The goal started in the Laker defensive zone when Harrison Roy won a faceoff back to Jacob Nordqvist, who skated behind his own net with the puck before sending it into the neutral zone. Tritt collected the puck between two St. Thomas defenders and dangled his way through the offensive zone before getting a shot off that beat Tommies goaltender Peter Thome. The highlight reel goal, which stood as the only even strength goal in the game, marked the freshman’s second career goal.

Despite a combined six penalties through the rest of the period, the first twenty minutes of play ended with the Lakers leading 1-0.

At 2:42 of the second period, the Lakers extended the lead to 2-0 when Mitchell Oliver scored his first goal of the season on a power play. The Lakers were putting pressure on the Tommies in the offensive zone, and Josh Nixon and Jacob Nordqvist worked along the boards to get the puck back to Oliver at the blue line. The senior defenseman sent a wrister from the point past Thome for the two-goal advantage.

With exactly five minutes played in the second period, Oliver was assessed a five minute major penalty and a game misconduct for grabbing the face mask. With a St. Thomas skater taking a slashing penalty at the same time, the two teams skated four-on-four for two minutes before the Tommies had a three minute power play. Grant Loven and Kyler Grundy netted goals less than a minute apart for the Tommies on the power play to tie the game at two.

Just like the first period, special teams played a crucial role in the second period as eight penalties were called including two majors. With Laker defenseman Jake Willets in the box for delay of game, senior forward Miroslav Mucha netted his first goal of the season while shorthanded to regain the Laker lead. Louis Boudon sent the puck to Mucha in the neutral zone and the assistant captain gained the offensive zone before sniping a shot into the top corner of the Tommies net for a 3-2 lead.

St. Thomas was called for a major penalty, giving the Lakers a five minute power play with just over a minute left in the period. At 19:11 of the period, Boudon tallied his third goal of the season to put the Lakers back up by two goals. With the Lakers set up in the Tommies zone, Roy sent a pass from the half boards to Brandon Puricelli who was playing one of the point positions for the Lakers. Puricelli slid the puck to Boudon at the far circle, who dropped to a knee to get the slapshot off that stood as the game winning goal.

Just 15 seconds into the third period, Grant Loven brought the Tommies back within a goal as he netted a shorthanded goal to make it a 4-3 game. Loven forced a turnover behind the Laker net with a strong forecheck and tucked the puck into the open Laker net for his second goal of the game.

Roy, who has been excellent for the Lakers through his first six games of the season, recorded his third goal of the season with a power play goal at 1:05 of the third period. The power play goal was a result of the major penalty that was called in the closing minutes of the second period. The Laker power play was clicking as the goal was a result of tic-tac-toe play from the LSSU power play unit. Puricelli sent a cross ice pass to Boudon along the boards, and Boudon followed with another cross ice pass to Roy, who was stationed inside the faceoff circle. Roy dropped down to a knee to get enough on the shot for the puck to make its way just under the crossbar for a 5-3 lead.

The Lakers capped off the game’s scoring at 19:38 when Jacob Nordqvist scored his first goal of the season following a scrum outside Thome’s crease. Mucha and Willets recorded the assists on the final goal of the game. The assist marked Willets’ first point as a Laker.

Eisele finished the night with 31 saves in his second win of the season, including 15 saves in the second period. Thomas stopped 23 shots from the Lakers.

Lake Superior State will be on home ice again next weekend as the Lakers host the Union Dutchmen for a non-conference weekend series at Taffy Abel Arena. The opening game against the ECAC team will be played at 7:07 on Friday, Oct. 22 while the series will conclude on Saturday, Oct. 23 with a 6:07 p.m. puck drop. The game will be available to stream on FloHockey. Fans can tune in to listen to Bill Crawford and Matt Pocket on the radio call on 99.5 YES FM.