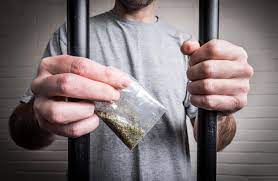 One of the many duties of the Corrections Staff, is maintaining safety and security, specifically preventing smuggling of contraband and narcotics.

Over the past several months Corrections Officers and Detectives have been extra busy with smuggling investigations.
Narcotics are often smuggled into the facility by those being arrested and those who carry the drugs internally. Other times friends or family, outside the facility, assist inmates by attempting to send in narcotics. Once the drugs are inside the facility the drugs are used and/or sold to other inmates. This causes a very high risk of overdose potentially.

Sheriff Bitnar highlighted a couple of those investigations that have recently resulted in Felony Charges:

INVESTIGATION #2
Corrections Officers were seizing narcotics that were being sent by US Mail to inmates within our facility. Corrections and Detectives conducted a joint smuggling investigation.

INVESTIGATION #3
An inmate had a family member drop off an item for her at the Chippewa Co Sheriff’s Office. During inspection narcotics were found. This investigation lead to the arrest of the family member and the inmate.
1- Harley McKerchie 28 yr old
– Contraband, Prisoner

I would like to thank our Corrections Officers and Detectives for their diligence in keeping narcotics out of our Correctional Facility. All suspects are innocent until proven guilty.

The Chippewa Co Sheriff’s Office continues to investigate additional smuggling cases and will keep you updated on future arrests.