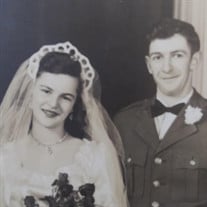 Richard bought his first toolbox when he was 16 years old. He joined the United States Airforce and was honorably discharged after 20 years of service. Richard met Donna while he was still in the service. She was only 16 when they started their family. The Air Force and their children were a big part of their early years. During their time in the Air Force, they live in Florida, Texas, Spain and Michigan. After Richard retired, they moved their family to Goetzville where Richard worked for his sister-in-law at Fireck’s Upholstery Shop and drove the school bus for DeTour Area Schools. Donna was busy keeping the family together, canning, gardening, and playing penny ante poker. They always looked forward to visits with friends and family, Sunday Brunch at grandmas, and a good polka. After 66 years together through all the ups and downs, their love endured and in the end they were inseparable.

Richard was a member of the Knights of Columbus.

Final Resting Place will be Bethel Cemetery in Pickford, Michigan.