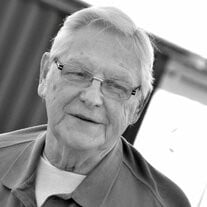 Donald Merle Marlatt, age 86, of DeTour, Michigan, died on October 14, 2021, at Harborview Assisted Living. He was born on December 23, 1934, in Hartville, Ohio, to Merlin Guy and Nellie Pauline (Patton) Marlatt.

Don grew up in Afton, Michigan, before the family moved to River Rouge, Michigan, where he attended River Rouge Area Schools. He met Helen J. Bertchinger in 1953. They married on July 23, 1955, in Dearborn, Michigan. Don then served in the United States Army for a year before returning home to his family. They raised two children while Don worked for General Motors. In 1988,
Don retired and they moved the Eastern Upper Peninsula. Since then he was the local gunsmith and volunteered for the DeTour Ambulance for over thirty years.