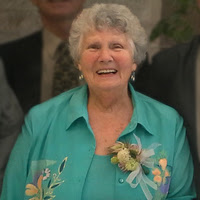 She was born Dec. 8, 1929 in Rochester, Mich., to Raymond and Helen Fowler, and moved to the Upper Peninsula when she was a child.

People talk of being busy today, but most of us don’t come close to knowing the busy of raising six kids. She was modest about what it took to keep a big family going, but all of her children credit their successes in life to her.

In spite of her full-time occupation, Bobbie found time to transform the lawn of their house into an extensive flower garden that was well-known in the neighborhood and beyond. She especially enjoyed watching the crocus and tulips spring forth after a long winter.

Bobbie and Red gathered regularly with members of the Married People’s Club and enjoyed steak dinners with friends at the cabin they owned for many years on Lake Superior near Iroquois Point. She never missed a chance to swim in Lake Superior, from as early as May to as late as October, and spending time on the beach was one of her favorite things to do. She took her last dip in the lake at 90 years old.

Bobbie had a beautiful voice and she loved to sing. She was a member of the Mary Wood Chorus for many years and sang at many weddings, funerals, and family gatherings. She loved Sunday dinners with family. Her grandchildren especially enjoyed Christmas Eve parties at Grandma and Grandpa’s house. She taught them the importance of getting in the water, stopping to smell the flowers, enjoying a good dinner, and celebrating the simple things in life.

In accordance with Bobbie’s wishes, there will be no funeral service. Burial will be in Mission Hill Cemetery.

Memorials may be made to Hospice of the EUP.