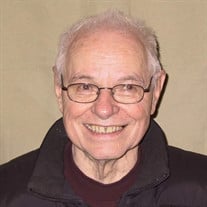 Ralph William Shiplett age 88, of DeTour Village Township, was called home by his Heavenly
Father September 7, 2020, of heart failure. Born December 28, 1931, in Dearborn, Michigan, youngest of five to Elmer Throusten Shiplett and Marie Anna Keller. Ralph attended Dearborn schools graduating Fordson High in 1950. He joined the USMC March 28, 1952, and was honorably discharged March 27, 1960. Ralph made Cpl. October 10, 1953, serving in Japan during the Korean War, and received three medals: National Defense Service Medal, Korean Service Medal, and United Nations Service Medal. He became a sharpshooter while in active service. One of the many stories he loved to talk about – but only when asked – was the Marine Corps asked him to stay in service and join in competitive shooting. Instead he married Janice Carrol Harlan on April 9, 1955, in Dearborn, Michigan. She passed away November 28, 1971. During 16 years of a loving marriage they had five children. Ralph attended night school at Lawrence Institute of Technology, graduating with a degree in Electrical Engineering on June 6, 1965.

Ralph is survived by his second wife, Kathleen; sister-in-law, Eleanor Anne-Lewis-La Roy of Colorado Springs; our blended families and blessed with many loving grandchildren, great grandchildren, nieces, and nephews, great nieces and nephews of both families; and one great-great-niece, (LaRoy); sadly too many to name or try to count accurately.

In 1994, Ralph and Kathleen retired from Ford Motor Company, Automotive Assembly Division, Dearborn, after 30 and 35 years of service respectively. Ralph travelled extensively for vehicle car launches at Assembly Plants all over the United States and Ontario, Canada. He worked in SQA, Process Engineering and about his last five years were spent in the Electrical & Instrument Panel Process Section. He moved his family to Stockbridge (Dansville) Michigan, and travelled 144 miles (round trip) daily, year round. Dedicated worker, there were times in the winter when the company issued a ‘snow day’. Ralph had to leave home too early to find this out and sure enough, Ralph would show up at work late, but he would get there. When he married Kathleen, he moved into her home in Westland, Michigan. A very special friend, Sandy Hovis, was responsible for Ralph and Kathleen meeting and they dated for nineteen years before marriage. Blending nine children into one family was a serious commitment and Ralph just loved to say “it was when he and Kathleen ran out of excuses”.

In January 1995, Ralph and Kathleen moved to DeTour Village, Township, on Lake Huron. Then moved to the next bay over on Woodsman Trail in 1997 for their permanent lodging. From that day forward they became very active in numerous activities. They joined the DeTour Senior’s Club which met once a month for a pot luck dinner. Helped coordinate many senior trips, was secretary of the club for a few years where he developed a large group of great friendships. His love of baseball led him to join the Raber Sr.’s Team. They met once a week, alternating weeks with a Sr. Team from Sault.Ste. Marie, Ontario, Canada. The Raber Team was sure they won the most games and kept the ‘toilet seat’ trophy in the U.S. more times than not. Good times and great friendships were had by all, with a picnic at the end of each season alternating sides of the St. Mary’s River. Each side would also host a dinner outing to present the winning team with the coveted ‘trophy’. Ralph enjoyed camping, square-dancing, doing the Polka at weddings, traveling, (Perue, Ottawa, Ontario, Canada, two Alaska cruises, trip to England, Ireland, Scotland and Wales. Especially enjoyed Kyaking with his kids, nieces and nephews that joined them at Borchers B&B, Grayling, Michigan, for about 16 years, prior to COVID. This past Memorial weekend, five family members met there for a quiet weekend in his honour.

Absolutely everyone loved Ralph. He was a hard-working man, a very proud but humble Marine veteran, a loyal husband, father, grand-father, great-great grandfather. With an unparalleled sense of humor (mostly at Kathleen’s expense) he had a great ability to fix things and loved to putz around for hours to fix it right. Ralph is irreplaceable to his theatre cohorts. He was involved on stage, or behind the scenes, often both, in every play the Art’s Council did for over 20 years, as well as numerous productions for DeTour Arts and Technology Academy, DeTour Village Players, The Les Cheneaux Theatre group in Cedarville, Soo Theatre Project, and The Chippewa Theatre Guild. During the school’s production of Little Mermaid Jr. this year, our first show without Ralph, his name kept coming up. “How did Ralph program this light board?, or What would he have done to make this set piece move better?” John Orr, a very handy and with a hammer, saw and drill himself, kept saying during Mermaid and Camelot set construction, “This is a job for Ralph and his clamps!” So, I guess we’re not totally without Ralph. He’ll be forever in our thoughts and hearts! His contribution to the theater in terms of acting roles is immense! There are simply too many shows to mention them all. His onstage acting credits include: The Sound of Music, Oklahoma, Oliver, 45 Minutes from Broadway, Mr. Scrooge, Chicago, Into the Woods, Blithe Spirit, The Odd Couple and Harvey. His favorite role and one that evokes the most cherished memory of Ralph’s acting, was Norman Thayer in On Golden Pond, in which he played opposite our dear friend and the founder of the Eastern Upper Peninsula Fine Arts Council, Sandy Wytiaz, who also passed away suddenly a few years ago. As his wife, Kathleen, frequently stated, “the reason he was so good at playing Norman was because he was simply playing himself to perfection”. This information regarding Ralph’s love of the performing arts was graciously written by David Rhinard, DeTour’s current President, EUPFAC, with a lifetime of directing, producing, performing and singing himself.

Ralph William Shiplett was ‘A Believer’!! His love of God, his faith, devotion and service to Redeemer Evangelical Lutheran Church of DeTour Village, far outweighed everything else in his lifetime. Once again, as a very humble man, many people and maybe only his wife Kathleen, truly knew his devotion to God and his Bible. Ralph and Kathleen attended church nearly every Sunday and Wednesday’s Bible Study. He became an Elder early on and later replaced France Spenser as Treasurer when she retired and since passed. At some point in time he also became Secretary and then President up until his passing. He is deeply missed by the members of Redeemer Lutheran and many members who knew him in our Sister church, Drummond Island Lutheran Church (Missouri Synod).

Ralph was Kathleen’s best friend and the love of her life. In honour of their 25 years of marriage September 28, 2019, they repeated their wedding vows, with family and friends. Rev. Donald Nemec officiated.

Sadly, but joyfully, on September 25, 2021, we will have a Memorial Service in his Ralph’s honour, Rev. Donald Nemec officiating. Following the service there will be ‘A Celebration of his Life and Luncheon’ at the Sandy Wytiaz Memorial Hall behind the Sacred Heart Catholic Church on Main Street in DeTour, 1:00 pm to 3:30 pm; and anytime after 5:30 a smoked pig roast with leftovers, etc., karaoke and bonfire later in the evening orchestrated by our super neighbors Judy and Lance Avison, is planned at the Shiplett home. All are welcome.

Galer Funeral Homes & Cremation in Pickford, Michigan, is serving the family. Condolences may be sent to the family at www.rgalerfuneralhome.com.