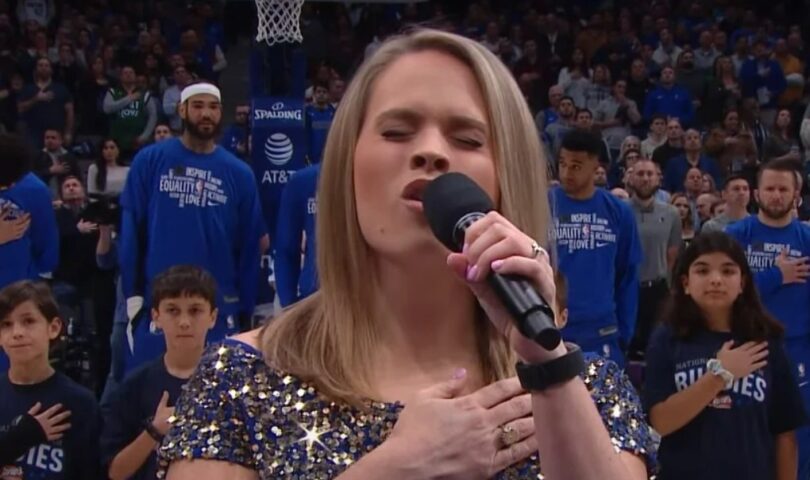 AUSTIN, TX – The “Star-Spangled Banner Protection Act” went into effect Wednesday, requiring professional sports teams in Texas to play the national anthem before the start of any home games.

In June, Gov. Greg Abbot signed the law, which states that teams that refuse to comply will lose government funding, which could cost teams millions of dollars.

The law was first introduced after Dallas Mavericks basketball team owner Mark Cuban refused to play the national anthem before 13 games early in the NBA season.

Passage of the Republican-backed bill became a priority for Lt. Gov. Dan Patrick, who directed a tweet at Cuban last year reading:

“Your decision to cancel our National Anthem at (Dallas Mavericks)  games is a slap in the face to every American (and) an embarrassment to Texas. Sell the franchise )and_ some Texas Patriots will buy it.“

“We ARE the land of free & the home of the brave.”

The decision to not play the national anthem at Mavericks games went largely unnoticed at first, as COVID-19 restrictions were in place, and spectators were not allowed to attend. However, fans returned to the seats on February 8, 2021, and a reporter noticed the change. The public outcry forced the NBA to act.

Two days later, the NBA directed teams to play the national anthem prior to their games “in keeping with longstanding league policy.”

The Mavericks complied with the directive and played their game that night with the national anthem for the first time in the 2020-21 season.

Cuban was forced to issue a public statement to answer the public outcry:

“We respect and always have respected the passion people have for the anthem and our country. But we also loudly hear the voices of those who feel that the anthem does not represent them. We feel that their voices need to be respected and heard because they have not been.”

The new Texas law quickly passed the state Senate easily when 10 the states 13 Democratic senators supported the bill, however, passage was a fight on the House floor.

“I don’t even understand why we would feel the need to force someone into singing any song. But if we are going to force people to sing a song, we should at least be mindful of the people playing on these teams, the people that are actually in the stands supporting these teams.”

During House floor debate in May, Democrats tried to claim that the bill was unconstitutional and a violation of the First Amendment protection of free speech.

Their argument was quashed by Rep. Dustin Burrows (R-Lubbock), who pointed out that teams were free to decide not to play the national anthem if they were willing to give up state money:

“It’s very simple. If they do not want to play the national anthem, they don’t take the tax dollars. If we’re going to go ahead and subsidize with hard-earned American dollars the sporting facilities and the teams in the different ways that I think is articulated in this bill, then this would apply.”

Rep. John Turner (D-Dallas) gave a different reason for casting his vote against the bill:

“I believe the national anthem is even more meaningful when it is played freely, not as a result of legal compulsion.

Upon introducing the bill earlier this year, Lt. Governor Patrick argued that Cuban’s action was clear evidence that the bill was necessary:

“It is hard to believe this could happen in Texas, but Mark Cuban’s actions of yesterday made it clear that we must specify that in Texas we play the national anthem before all major events. In this time when so many things divide us, sports are one thing that bring us together — right, left, black, white, and brown. This legislation already enjoys broad support. I am certain it will pass, and the Star-Spangled Banner will not be threatened in the Lone Star State again.”