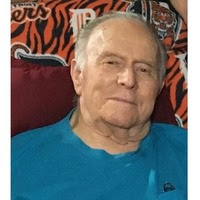 Lyle was born on January 12, 1933, in Lake Orion, MI to the late Frederick and Jessie (Lind) Hopper.  He served his country in the U.S. Army.  Later, he graduated from Brimley High School with the class of 1970.   Lyle married Pauline E. Timm on August 13, 1955, in Bay City, MI.  Along with his wife, they worked as caretakers of Piatt Lake Bible Conference/Hiawatha Youth Camp for 25 years.  Lyle was also a logger most of his life and worked at Brimley Schools as a bus driver/mechanic for 18 years.  He attended Brimley Baptist Church.

Lyle was preceded in death by his parents, his wife: Pauline Hopper, three brothers: Fred, Jr., Oliver, and Aaron Hopper; and two great-granddaughters:

Funeral services will be held at 11:00 AM on Wednesday, September 15, 2021, at the Strongs Community Bible Church with Pastor Bob Shaw officiating. Visitation will be held that same day from 10:00 AM until the time of the service.

In lieu of flowers, memorials may be left to Hiawatha Youth Camp.