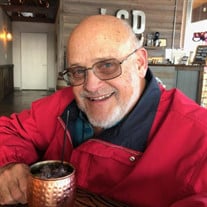 Jon was raised in Sault Ste. Marie. He attended Washington Elementary School and graduated from Sault High School in 1963. He went on to attend the Sault branch of Michigan Technological University (now Lake Superior State University) to study business. He married his first wife in 1965 and had his two daughters, Leslie and Amy. Jon raised his two daughters in West Branch, Michigan, and bought an office supply store that he operated for many years. Jon was a natural entrepreneur and moved back to the Upper Peninsula in 1988 to pursue other business adventures including running the local Pizza Hut. It was in 1989 that he met Sharyn Ruth (Stevenson) Steinbach and her children, Jennell, Dewayne, and Scott. The two married on August 10, 1991, and moved to Cedarville, Michigan in 1995 after purchasing Cedarville RV Park.

Jon was a member of Hessel Presbyterian Church. He enjoyed a good laugh, visiting with friends and family, monitoring the weather, cars, reading and fine (or not so fine) Scotch.

Jon is preceded in death by his wife of 27 years, Sharyn; sister Raya Cook, and his parents.

Visitation will be held at Galer Funeral Homes in Pickford, Michigan, on September 3, 2021 at 2:00 PM followed by a 3:30 PM memorial service.

Final resting place will be at Maple Grove Cemetery in De Tour, Michigan.