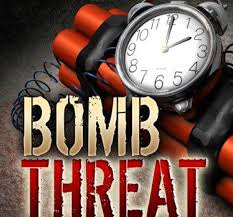 On September 16th, 2021 at 0850hrs, officers from the Sault Ste. Marie Police Department responded to the report of a suspicious package at the AT&T store in the City of Sault Ste. Marie. The AT&T store is located at 2972 w. 8th Street within the Cascade Crossing business district. An AT&T employee found a package outside of the store that was wrapped in tape and had a wire protruding from it. The package had a handwritten note on the top of the box. In response, Sault PD requested resources and assistance from the following agencies: The City of Sault Ste. Marie Fire Department, Sault Tribe Police Department, Chippewa County Sheriffs Office, Michigan State Police, Michigan State Police Bomb Squad, and Federal Bureau of Investigations.

In order to preserve the scene and also keep the public safe, a safe-zone perimeter was set-up around the AT&T Store. The Michigan State Police Bomb Squad responded to the scene and determined there was an object that was potentially explosive, inside the package. The bomb squad secured the package and removed it from the scene. No one was hurt.

This investigation is active and no additional information is being released at this time, except for what is contained below in the FBI information release. Joint investigation efforts between Sault PD, FBI, Michigan State Police, Cheboygan Police Department, Cheboygan County Sheriffs Office, and Sault Ste. Marie Tribal Police, will continue.

If anyone has any information or tips about the incident being investigated, please contact Det/Sgt.
Darrell Harp at 906-632-5752 or dharp@saultcity.com or the FBI at 1-800-CALL-FBI. Tips can also be
submitted online at tips.fbi.gov. Individuals who provide information may remain anonymous.

The FBI is asking the public for information leading to the identification of the person(s) responsible for two explosive devices which were left outside cellphone stores in Cheboygan and Sault Ste. Marie, Michigan.

On Thursday, September 16, .2021, two explosive devices were discovered at cellphone stores in Sault Ste. Marie and Cheboygan, Michigan. Law enforcement officers and bomb technicians from the Michigan State Police and the FBI responded to the locations and rendered the devices safe.

Both devices were contained inside USPS Priority Mail boxes, sealed with black duct tape, and placed outside the cellphone stores. There were threatening notes addressed to Verizon and AT&T on the top of each box. The notes were signed either “HJ” or “Handcuff Johnny.” The letters “CMT” were written on each box.

The FBI is seeking information regarding the person(s) responsible for the letters and explosive devices. Anyone with information is urged to contact the FBI at 1-800-CALL-FBI. Tips can also be submitted on line at tips.fbi.gov. Individuals who provide information may remain anonymous.

The FBI reminds members of the public to remain vigilant and not touch, move, or handle any suspicious or unknown packages, but to call the nearest law enforcement agency.