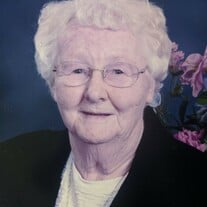 Alice married Arvo Adolph Soorus on December 29, 1941. Alice was a wonderful and loving mother, mother in law, foster parent, grandmother, aunt, sister, and friend. She was a lifelong member of the First United Presbyterian Church. She spent many years at her Monocle Lake cabin, which she loved dearly. She loved watching freighters, quilting blankets, knitting baby sweaters, and watching her music channel Lawrence Welk. Alice loved traveling across the country with her sister Florence.

Thank you to all of the caregivers at Long Term Care for all of your loving support and going above and beyond for her and the family.

Visitation will be Thursday September 2, 2021 at the First United Presbyterian Church, 555 Bingham Ave., Sault Ste. Marie, Michigan, from 10:00am until the time of the Memorial Service at 11:00am with Reverend Mark Gabbard officiating. Final resting place will be Hillcrest Cemetery in Raco, Michigan.

The family requests in lieu of flowers, contributions be made to the First United Presbyterian Church in Alice’s name. Clark Hovie Galer Funeral Home assisted the family with arrangements.