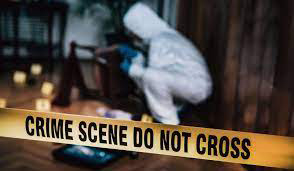 UPDATE – On August 11, Jacob Russell Mckerchie, a 28 year-old from Sault Ste. Marie, was released from the War Memorial Hospital and lodged at the Chippewa County Correctional Facility by the Sault Ste. Marie Police Department. On August 12, Jacob Mckerchie was arraigned in the 91st District Court on the charge of Open Murder and he is being held without bond. Jacob Mckerchie is presumed innocent unless and until proven guilty in a court of law.

The only additional detail being released as to the victim, 27 year old Hayley Smith, is that she suffered a severe laceration to her throat.

Mckerchie’s next court appearance is scheduled for August 26th, 2021 at 9:30 a.m. and court is open to the public. The investigation is ongoing and no further details will be released at this time.

ORIGINAL STORY – On August 10th, 2021, officers of the Sault Ste. Marie Police Department investigated a homicide at the residence of 810 Minneapolis Street in the City of Sault Ste. Marie.

At 2153 hours, Chippewa County Central Dispatch received a 911 call from the residence at 810 Minneapolis Street stating a female and male subject at this address had both been cut. While officers were enroute, it was reported that the male subject had left the scene on-foot and was injured. When responding officers arrived at the address they found a female deceased. The female was later identified to be Hayley Anne Smith, 27 years-old, from Sault Ste. Marie. Additional responding officers located the male subject a couple blocks away and took him into custody. The male subject was transported to the War Memorial Hospital for a severe laceration to one of his arms.

The Michigan State Police Crime Lab from Grayling, MI has responded to the scene to assist with the investigation. This incident is an open and active investigation and because of this no further details are being released at this time.

If anyone has any information or tips about the incident being investigated, please contact Det/Sgt. Darrell Harp at 906-632-5752 or dharp@saultcity.com.