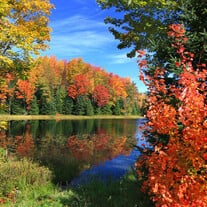 Hubert grew up in different areas all over the United States. He settled down in California with his wife, Patricia and they raised their son John there. He later moved to St. Ignace where he worked many years as a mechanic at George’s Body Shop and met his significant other, Terry Corp.

Hubert was a supporter of the VFW.

When Hubert had some down time and the season opened, he enjoyed hunting as well as fishing.

Hubert is survived by his significant other, Terry; son, John (Jessica) Maudrie of St. Ignace; grandsons, Liam and Wyatt; and brothers, Raymond Maudrie of Meridian, Idaho and Richard Maudrie of West Branch, Michigan.

Hubert was preceded in death by his parents, and late wife, Patricia.