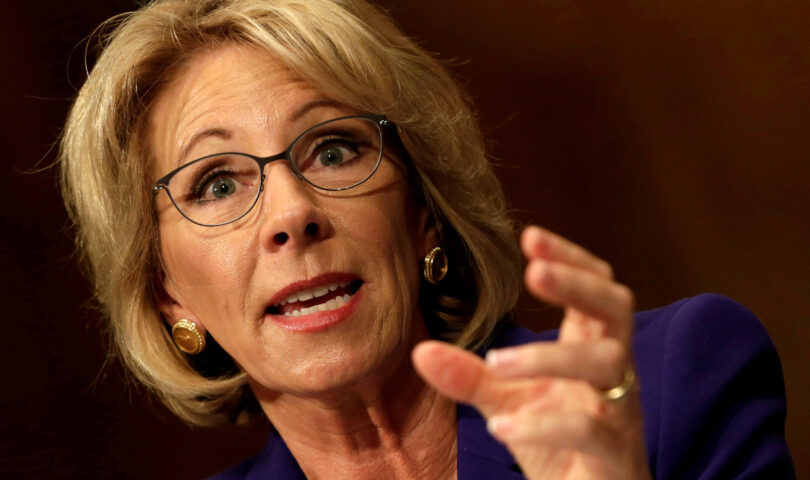 Former U.S. Education Secretary Betsy DeVos said Tuesday she will not run for Michigan governor in 2022, putting an end to speculation about the onetime Trump administration Cabinet member and partner in one of the state’s most influential Republican couples.

“I am not running for governor,” DeVos told The Detroit News, which reported the announcement first. “It’s not going to be me. I appreciate that some folks are interested in that, but I think the rumor and interest really only serves to highlight how desperate Michiganders are for new leadership.”

Advisers to DeVos, 63, said she never weighed a campaign to challenge Democratic Gov. Gretchen Whitmer, despite weeks of chatter in Michigan’s political class.

Though a billionaire able to finance a campaign and former state party chairwoman with key connections, DeVos would have faced complications in a Republican primary and the general election.

Despite four years on former President Donald Trump’s Cabinet, DeVos quit her post a day after the deadly U.S. Capitol siege in January, blaming the defeated president’s false claims that the 2020 election was stolen for inflaming tensions as Congress prepared to certify the 2020 presidential election.

“There is no mistaking the impact your rhetoric had on the situation, and it is the inflection point for me,” she said in her letter of resignation.

In the meantime, some Trump loyalists who backed the former president’s claims and organized Michigan supporters’ travel to Washington to protest the outcome have taken a seat in the state party’s inner circle.

In a general election, DeVos would carry the Trump baggage, who won the state in 2016, but lost it narrowly in 2020.

DeVos would also be the face of her husband Dick’s decade-long effort to curb union power in the longtime manufacturing state.

Still, DeVos remains respected in the party, and sparked talk of a gubernatorial bid after speaking to the Midland County Republican Party committee meeting last month, not a typical venue for a former Cabinet secretary.

DeVos spoke at the meeting at the invitation of U.S. Rep. John Moolenaar, aides said, an appearance aides said she only more recently had time to accept since leaving Washington.

Democrats, with whom DeVos remains unpopular, sought to capitalize on the rumors.

Chiefly, Whitmer, a Democrat expected to seek a second term, used it to raise money.

“DeVos is a threat to public education and the future of our state, and we need to be ready to counter her billionaire-funded campaign,” Whitmer was quoted as saying in a campaign fundraising email last week.

Republican James Craig, the recently retired Detroit police chief, has announced his candidacy for governor in 2022.