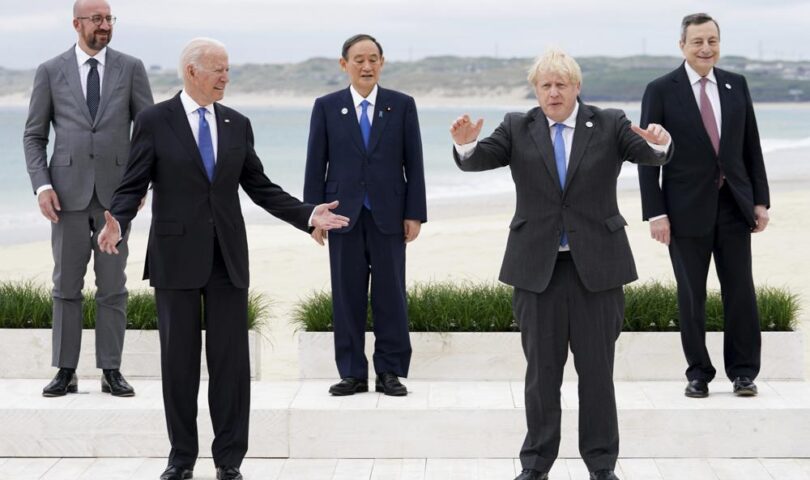 WASHINGTON (AP) — Two months ago, the leaders of the world’s seven major industrialized democracies met at the height of summer on England’s southwest coast. It was a happy occasion: the first in-person summit of the Group of Seven nations in two years due to the coronavirus pandemic and the welcomed appearance of President Joe Biden and his “America is back” message on matters ranging from comity to COVID-19 to climate change.

The smiles and sunshine seem distant as G-7 leaders meet again Tuesday, in virtual format, for crisis talks on Afghanistan. The country’s burgeoning refugee crisis, the collapse of its government and fears of a resurgence in Afghan-based terrorism have left the G-7 allies scrambling and threaten the unity of the bloc.

British Prime Minister Boris Johnson, the host of the June summit in the English resort of Carbis Bay, is reconvening the leaders amid widespread unhappiness from America’s allies about Biden’s handling of the Afghanistan withdrawal. Complaints have come from Britain, France, Germany and others in the G-7, which includes only one non-NATO member, Japan.

In Afghanistan, meanwhile, as desperate evacuees continued to be transported out of the country, CIA Director William Burns visited Kabul on Monday to meet with Abdul Ghani Baradar, the Taliban’s top political leader, according to a U.S. official familiar with the matter.

The Washington Post first reported Burns’ meeting with Baradar. A U.S. official confirmed the report on condition of anonymity because they were not authorized to speak publicly.

The lawmakers who head the G-7 nations’ foreign affairs committees urged leaders in a letter on Tuesday to “avoid arbitrary dates for ending military support to the evacuation.”

Johnson and others, including French President Emmanuel Macron, are pushing Biden to extend his self-imposed Aug. 31 deadline for the total withdrawal of U.S. forces in order to ensure the evacuation of all foreign nationals as well as Afghans who worked for or supported the American-led NATO operation that vanquished the Taliban in 2001 and has now accepted defeat.

“The British position is we want to stay longer if it is possible to do so,” said U.K. Defense Secretary Ben Wallace.

But he said the 1,000 British troops at Kabul’s airport would be unable to keep up the operation when the much larger American contingent leaves.

Despite Biden’s April announcement that the U.S. would completely withdraw from Afghanistan by the 20th anniversary of the Sept. 11, 2001, attacks, the nation was almost an afterthought when the G-7 met in June. COVID-19, China and climate change dominated the agenda. And expectations for Biden’s impending summit with Russian President Vladimir Putin were at the top of people’s tongues.

The leaders put Afghanistan as number 57 out of 70 points in their final 25-page communique -– behind Ukraine, Belarus and Ethiopia. Afghanistan didn’t even feature in the one-and-a-half page summary of the document. NATO had already signed off on the U.S. withdrawal and all that appeared to be left was the completion of an orderly withdrawal and hopes for a peace deal between the Afghan government and Taliban.

“We call on all Afghan parties to reduce violence and agree on steps that enable the successful implementation of a permanent and comprehensive ceasefire and to engage fully with the peace process. In Afghanistan, a sustainable, inclusive political settlement is the only way to achieve a just and durable peace that benefits all Afghans,” the leaders said, without a hint of urgency.

The leaders said they were determined “to help the people of Afghanistan, including women, young people and minority groups, as they seek to preserve hard-won rights and freedoms.”

But as summer swings into fall, those hopes have been dashed.

On the eve of the meeting, the White House said Biden and Johnson had spoken by phone and discussed “the importance of close coordination with allies and partners in managing the current situation and forging a common approach to Afghanistan policy.”

Johnson’s office said the two leaders “agreed to continue working together to ensure those who are eligible to leave are able to, including after the initial phase of the evacuation has ended.”

Biden administration officials have refused to be pinned down about whether an extension is likely or even possible given the Taliban’s demand that all U.S. forces leave by the Aug. 31 deadline.

White House press secretary Jen Psaki said she expected questions about the Afghanistan evacuation timeline to be part the G-7 meeting. Psaki would not predict any announcements from the meeting but said the focus would be to evacuate Americans and Afghan allies as quickly as possible.

White House aides have said they think the meeting could grow contentious, as U.S. allies have looked on with disapproval at the tumultuous American drawdown.

Senior British military officers have expressed anger over the U.S. pullout, saying it exposes the hollowness of the trans-Atlantic “special relationship” — a phrase used since World War II to stress the bonds of history, friendship and shared diplomatic interests between London and Washington.

And the German government is expressing impatience with the pace of the evacuation effort. Foreign Minister Heiko Maas said the majority of local staff who worked for his country in Afghanistan haven’t yet been gotten out and called Tuesday’s G-7 meeting “very important” for discussing international access to the Kabul airport beyond Aug. 31.

British defense minister Wallace, who has called the U.S. deal with the Taliban that set the deadline a “mistake,” was downbeat about the prospects of an extension to the evacuation effort.

“It is definitely worth us all trying, and we will.”