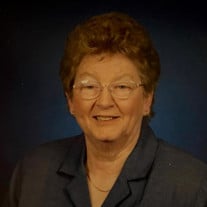 Delores grew up in Pickford and attended Pickford Schools. When she was a senior, her parents moved to Flint. She lived with a local doctor’s family so she could finish high school in Pickford graduating in 1947. On August 11, 1948, she married her childhood sweetheart, R. Alex Cottle and they made their home on the Cottle family farm where they farmed, and raised their five children. When her children were older, she worked at the Pickford Dry Goods store for many years until the store closed. She an Alex also served as sextons for the Cottle Cemetery for many years

Delores was a member of the Pickford United Methodist Church. She and Alex were also active in the Pickford Grange, 4-H, and the Chippewa County Fair Council.

Delores enjoyed bowling and camping. She and Alex always enjoyed traveling and traveled often during their retirement years. Alex died in 2016.

Burial will be in Cottle Cemetery, Mackinac County, Pickford, Michigan.