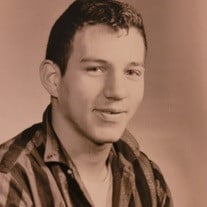 David grew up in St. Ignace and graduated from LaSalle High School. He met his wife, Rita Robbins while they were both in high school and they married October 27, 1962 at the St. Ignatius Loyola Catholic Church. He spent twenty years working at Proctor and Gamble as a line worker. He spent his older years working at the Kewadin Casino as a slot machine technician.

David enjoyed fishing in his spare time. Most of all, he loved all sports. He never missed the opportunity to watch his children and grandchildren play.

A graveside memorial service will be held at Brevort Township Cemetery on August 28, 2021 at 12:00 Noon. Following will be a celebration of life at 2:00 PM at the Coast Guard Park in St. Ignace.