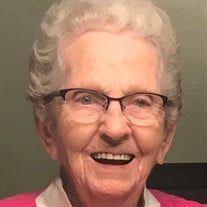 Belva was a lifelong Pickford resident. She attended Cowell School west of Pickford through eighth grade and then Pickford Schools, graduating in 1949. Upon returning from her senior trip, she worked on Mackinac Island. On August 9, 1950, she married Jim Rutledge, the love of her life, whom she had met while in high school and who had proposed to her before a dance. They were married just one day short of 71 years. They made their home in Pickford and raised four children. For twenty-six years, they traveled to the Rio Grande Valley to live for the winter months. In other travels, they visited all the Canadian Provinces and Alaska.

Belva was a member of the Pickford United Methodist Church and served as Marquette Township Treasurer for many years. She and Jim were members of the Suzie Q’s Square Dance Club in both Sault Ste. Marie, Michigan and Sault Ste. Marie, Ontario. She was also a 4-H Leader.

Belva enjoyed hunting and loved time spent at the family deer camp including cooking on the woodstove there. She loved to dance, especially square dancing. She was very active and in addition to traveling and dancing, she also enjoyed golfing, cooking and baking, quilting, sewing, knitting, and Swedish weaving. The baby sweaters she knit for her grandchildren are treasured.

Burial will be in Cottle Cemetery, Marquette Township, in Pickford.