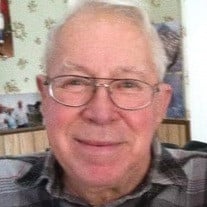 Ardis James Olmstead, age 96, of DeTour, Michigan, died on August 3, 2021 at Medilodge in Sault Ste. Marie, Michigan. He was born May 17, 1925 in DeTour to Lester Charles and Sarah Ellen (Smith) Olmstead.

Ardis grew up in DeTour and attended DeTour Area Schools. He left high school in 1943 to join the U.S Army. In 1944, he returned home to finish his education and graduated in 1945. He left DeTour for a brief time to attend Detroit Barber School and graduated from there in June of 1948. While he lived in DeTour, he was a part-time barber and worked at Drummond Dolomite. He married Andrea Dolores Knapp August 28, 1948. After his first wife passed, he met Lalita in 1992. They married November 7, 1992.

Ardis was a member of the DeTour Barbershop Quartet, the VFW chapter in Sault Ste. Marie, Michigan, the AmVets, and the Disabled American Veterans Association.

Ardis loved working in his shop with wood crafts. He also enjoyed fishing and spending time with his family out on the boat. When the snow was right, he also liked to go snowmobiling.

Memorial Contributions may be made out to Harbor View Assisted Living, P.O. Box 123 DeTour Village, MI 49725.