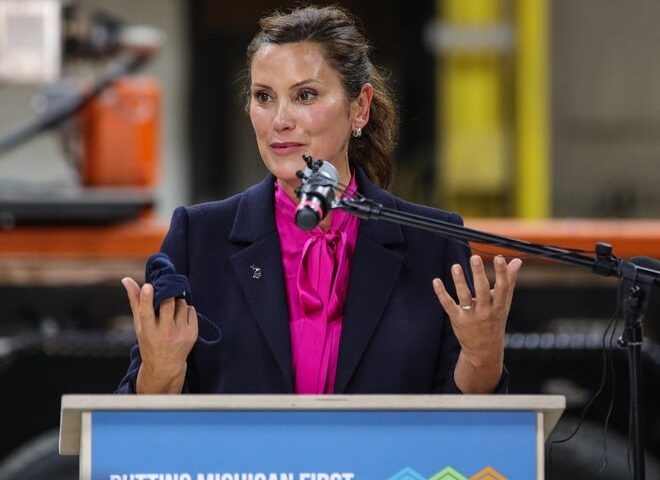 Gov. Gretchen Whitmer said Tuesday she does not expect the state will issue a mask mandate or any other new COVID-19 pandemic orders any time soon, despite federal health officials issuing new guidance that calls on even some who are fully vaccinated to mask up.

“I do not anticipate another pandemic order, not in the near future and maybe not ever,” Whitmer said, speaking after an affordable housing announcement in Detroit.

“The fact of the matter is we now know a lot about this virus, we’ve got vaccines. The best way to stay safe is to get vaccinated. I’m really, strongly encouraging everyone to do just that.”

Michigan is currently experiencing some of the lowest case rates, hospitalizations and death trends of the pandemic. However, Whitmer wore a mask before and after speaking at the event. She’s fully vaccinated and the event was in a large, semi-open space.

The governor said Dr. Joneigh Khaldun, chief medical executive for the state, encouraged her to wear a mask while indoors.

“So long as COVID is spreading from person to person, whether that’s in Alabama or halfway around the world, it could continue to mutate. Ultimately, those of us who are even vaccinated may see a variation that we are vulnerable to,” Whitmer said.

“And that’s why all of us doing our part, getting vaccinated, wearing masks when we are inside and close together, is always going to be the smart thing to do so long as COVID is around.”

The governor’s comments came moments before the U.S. Centers for Disease Control and Prevention announced something of an about-face on mask guidelines. The agency recommended Tuesday afternoon that people who are fully vaccinated against COVID-19 should resume wearing masks while indoors in areas of the country that are pandemic hot spots.

The CDC also recommended everyone inside K-12 schools wear a mask, even if they are fully vaccinated. However, the CDC says students and staff are safe to return to in-person learning if they follow health guidance.

The recommendations are intended to help protect those who are unable to get a vaccine, such as children and immunocompromised people, CDC Director Dr. Rochelle Walensky said.

But it’s also an effort to prevent additional virus spread that could lead to even more dangerous variants of the coronavirus down the road.

“The next variant that might emerge, just a few mutations away, could potentially evade our vaccines,” Walensky said during a conference call with journalists.

The recommendations, a reversal of guidelines issued in May that suggested fully vaccinated people are protected from the virus, are intended to combat the spread of the delta variant of the coronavirus, an exponentially more contagious form of the virus that has ravaged areas of the country with lower vaccination rates.

The CDC’s new recommendations apply to regions with high or substantial rates of transmission.

Fifteen states — mostly in the South — are classified as having high rates of COVID-19 transmission, according to the CDC. They are: Missouri, Florida, Louisiana, Arkansas, Mississippi, Alabama, Tennessee, Texas, Oklahoma, Kansas, Nebraska, Wyoming, Nevada, Arizona and Alaska. The U.S. Virgin Islands also has high transmission rates.

“This weighs heavily on me,” Walensky said. “I know at 18 months through this pandemic, not only are people tired, they’re frustrated. We have mental health challenges in this country. We have a lot of continued sickness and death in this country.

“I know, in the context of all of that, it is not a welcomed piece of news that masking is going to be a part of people’s lives who have already been vaccinated.”

Michigan’s current COVID-19 trends are among the best in the nation. Transmission rates are considered “moderate” by the CDC, but recent data indicates the situation is headed in the wrong direction again, as is the case in every other state, according to the New York Times coronavirus tracker.

There are 10 counties in Michigan that have had substantial to high community spread in the last week, according to the CDC. They are: Alpena, Branch, Cass, Hillsdale, Kalkaska, Mason and Van Buren counties in the Lower Peninsula and Gogebic, Iron and Dickinson counties in the Upper Peninsula.

The surge in cases in hot spots and across the nation are driven by the delta variant, which is believed to be the most contagious strain of the virus yet. It’s now the most dominant form in the U.S., according to the CDC.

Michigan was walloped in the spring by the B.1.1.7 variant, now known as the alpha variant. That strain was considered 50% more transmissible than other previous strains of the virus, and led to a statewide surge in cases, hospitalizations and deaths.

The delta variant appears to be even more contagious than the alpha strain. A study by Public Health England suggests delta is 60% more transmissible than alpha.

President Joe Biden said Tuesday the CDC’s new mask guidelines are “another step on our journey to defeating this virus. I hope all Americans who live in the areas covered by the CDC guidance will follow it; I certainly will when I travel to these areas.”

His administration is said to be weighing a COVID-19 vaccine mandate for federal workers. Those who decline to get vaccines would be required to undergo frequent testing, practice social distancing, wear masks and would be restricted from most travel, the New York Times and several other news organizations have reported.

Whitmer and Michigan health officials have said they rely on federal guidance for dictating state policy. But the governor and her administration were caught off guard in the spring when the CDC abruptly announced anyone fully vaccinated could ditch a mask in most settings.

That announcement resulted in immediate confusion and frustration, especially for businesses seemingly tasked with verifying a customer’s vaccination status. Within days, Michigan had updated its own rules to mirror federal guidelines.

Whitmer defended regulations that limited gatherings and required masking for most of the pandemic. Despite cries from critics that mask mandates and business closures were heavy-handed, the governor argued the measures saved lives

Improving trends — and the CDC’s mask guidance — prompted Whitmer and Hertel to roll back most pandemic regulations in June, ahead of previously announced plans.

Despite virus surges earlier this year, Michigan is weathering the storm of variants far better than other states. Its daily average cases, hospitalizations and deaths per 100,000 residents are among the lowest in the country.

But what is clear is that the number of coronavirus infections in Michigan are inching upward, as are the percentage of positive tests as the number of known delta variant cases in the state also creeps higher.

The state’s seven-day average number of cases was up to 441 Tuesday, the highest since the start of June. Hospitalizations had dropped drastically in the past month, but have leveled off and appear poised to increase once more.

On June 21, the state health department reported 25 known cases of the highly contagious delta variant, identified through whole genome sequencing. In a little more than one month’s time — as of Tuesday — there were 88 known cases statewide.