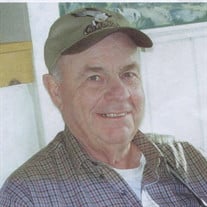 Nathaniel “Tanny” Raymond Armstrong, age 87, of Barbeau, Michigan, died July 1, 2021, at EUP Hospice House in Sault Ste. Marie, Michigan. He was born August 15, 1933, to Whitford Dyer Armstrong and Verna Elizabeth (Smith) Armstrong at the home of his mother’s sister, Cora and Bill Stirling, on Hursley Street in Sault Ste. Marie (to save money).

Tanny grew up in the Barbeau area and graduated from Pickford High School with the Class of 1950 where he was named “Class Optimist”. He served in the U.S. Army and was stationed in Germany from 1955-1957. Upon discharge, he returned to Barbeau to work on the family farm while also working nights helping to construct the Poe Lock in Sault Ste. Marie. In the early 1970s, Tanny and his brother Don constructed their first drainable pond. Over the years they went on to build many more ponds ranging in size from 1 to 230 acres where they raised millions of fingerling walleye, which were then transplanted into the waters of Northern Michigan and the Eastern Upper Peninsula. Walleye production continues to grow and change today under the management of Tanny’s nephew, Forbes and grandniece, Andrea. The farm is also a first stop to many Mackinac Island horses each fall where they graze the pastureland before being moved to their winter home.

Tanny and Raeona Atkins grew up just down the road from each other in the small town of Barbeau. He was a bachelor until almost age 70, when, after a twenty-year courtship, he married Raeona on April 27, 2003.

Tanny was a member of the Donaldson Presbyterian Church. He was a quiet and generous man, serving as an elder and singing in the choir, while also leading the youth group and teaching Sunday School for 40 years. He enjoyed Wednesday morning coffee fellowship with the men of the community. Tanny was a Mason and a member of the Farm Bureau.

Tanny looked forward to his annual fall trips to South Dakota and Wyoming with friends and family where they hunted pheasant and elk. He especially enjoyed music and was a talented guitar, mandolin, fiddle, and banjo player. As one of the early members of the Pickford Pickers, he spent many Saturday afternoons singing and playing music for those in the community.

Special thanks to Katie Clark, Kim Smith as well as the caring staff of the EUP Hospice House.

Inurnment will be in Donaldson Cemetery in Bruce Township, Michigan.