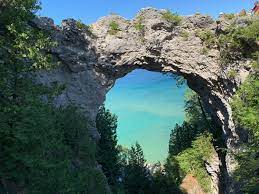 MACKINAC ISLAND, MI – Police on Mackinac Island are investigating after a man was found dead at the base of Arch Rock.

Mackinac Island Police Chief Doug Topolski confirmed Wednesday that a man in his 40s was found at about 9:15 a.m. The department is investigating the incident, but foul play is not suspected.

The man has not been identified, pending notification of family, but a name will be released later, Topolski said.

Topolski said it is likely the man fell from the area at the top of the unique natural limestone arch, which stands on Lake Huron’s shoreline 146 feet above the Great Lake and is visited by thousands of people each year.

There were no witnesses, Topolski said. The area around Arch Rock was closed for about two hours while police conducted their investigation.

Arch Rock is Mackinac Island’s most famous rock formation. At more than 50 feet wide, it sits far above the water and can be seen from the island’s perimeter road, M-185, and can be reached on foot as well. Viewing platforms are available on site.

“Climbing on Arch Rock is strictly prohibited,” Dominick Miller, marketing director for Mackinac State Historic Parks,  said. “This is for the safety of our guests as well as the structural integrity of Arch Rock itself. There is a platform that allows guests to get very near it, and it is definitely one of the most ‘selfied’ spots on the island.”