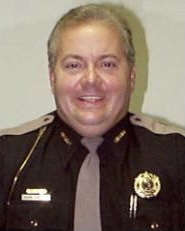 Houghton — Houghton County Sheriff Brian McLean died Monday after he was injured at his Upper Peninsula home over the weekend, authorities said.

McLean had been in critical condition at a hospital in Marquette, his office said in a statement.

He was on life support and died at about 8 p.m., representatives said.

“The sudden and tragic loss of this man who was both a leader and a friend, is hard to process, said Undersheriff Kevin Coppo. “Our hearts go out to his family during this truly difficult time.”

Details on funeral arrangements were pending, the Sheriff’s Office said.

No other details were released.

McLean was elected in 1996 and has been reelected every four years.

The Sheriff’s Office on Monday said he had been with the department 34 years and “recently held the title of longest serving sheriff in the state of Michigan.”

“I’ve reached that age where I could say, ‘Well, I’ll collect my Social Security and just retire and walk away,’” he said last fall before winning another term. “But it’s nice to be part of something meaningful. And I still have the drive to keep going.”