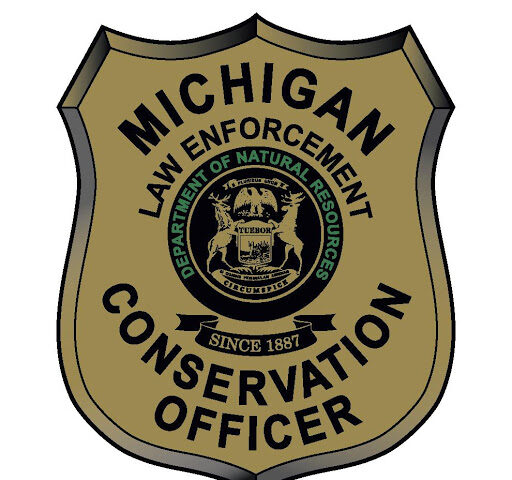 A 21-year-old man from Ghana, West Africa, and a 19-year-old Lansing woman expressed their gratitude to two Michigan Department of Natural Resources conservation officers after being rescued over the July 4 holiday from rough water in Lake Huron, offshore of the Les Cheneaux Islands in Mackinac County.

The two were staying at the Lansing woman’s family cottage, located in Mackinac County, and decided to take a personal watercraft for a ride. The man was operating the PWC with the woman as a passenger when they were both ejected into the rough, 59-degree water.

Prior to the incident, Conservation Officers Todd Sumbera and Cole VanOosten were conducting marine patrol and noticed the couple safely operating the PWC. About 20 minutes later, the two COs completed a routine check of another vessel when VanOosten noticed something floating in the water, about a half-mile from where they originally saw the PWC.

As the COs approached, they observed a woman flailing her arms, yelling, “Help him!” and pointing to a man about 30 yards from the drifting PWC. The man was wearing a life jacket that didn’t fit properly and was struggling to keep his head above the water.

While taking on water over the bow of the patrol vessel, Sumbera and VanOosten navigated to the man and pulled him aboard.

Sumbera told the man it wasn’t the officers who saved him — it was the life jacket. Despite the jacket not fitting well, it prevented the man from being completely submerged.

During that time, the woman was able to safely swim to the PWC but needed the required safety lanyard to start the machine; it was attached to the man’s life jacket. The officers returned the key to the woman, who operated the PWC back to her family’s dock, while the man — who had been in the water several minutes, was very cold, and had inhaled a “decent” amount of water — rode on the patrol boat with the officers.

Sumbera and VanOosten followed the woman back to the dock and made sure the man was OK before leaving. Both refused medical attention.

“I’m happy to hear that this young man and woman safely made it back to shore to continue their holiday weekend, in what could have been a tragic situation,” said Chief Gary Hagler, DNR Law Enforcement Division. “Sumbera and VanOosten were patrolling the right place at the right time. Throughout the state, conservation officers will continue to conduct marine patrols during peak boating times to ensure the safety of all boaters. This is an important reminder to always wear a properly fitted personal flotation device and to ride with an experienced operator who has completed a verified boater safety education course.”

This summer, the DNR has partnered on a life jacket campaign with McDonald’s to promote the increased use of youth wearing properly fitting life jackets while on active vessels. Youth who are observed wearing their life jackets by a conservation officer have the opportunity to receive a free McDonald’s ice cream or apple slice coupon. Conservation officers will continue passing out the coupons until Sept. 6.